UAW President Dennis Williams noted that despite some problems with its membership drive, the union saw an increase last year.

Despite a devastating scandal, adverse political environment and big defeats in key organizing drives in the auto industry, the United Auto Workers succeeded in adding nearly 15,000 new members in 2017.

The UAW reported the figure in its Labor Organization Annual Report, Form LM-2, which was filed with the U.S. Department of Labor. The report shows UAW membership at 430,871 in 2017, compared to 415,963 in 2016. This marks the ninth straight year of membership growth, the union said.

UAW membership climbed as a result of organizing drives in gaming, higher education, heavy truck and automotive suppliers as well as some more modest growth in auto assembly.

“The state of the UAW is strong,” said UAW President Dennis Williams. “We are organizing and growing at a steady pace,” added Williams.

Nevertheless, the UAW has still had a tough year, given the losses in key organizing drivers at Nissan’s plant in Canton, Mississippi, and at Fuyao Glass in Dayton, Ohio. The union also has been rocked by mushrooming scandal, involving payoffs to union staffers in the union’s FCA Department. 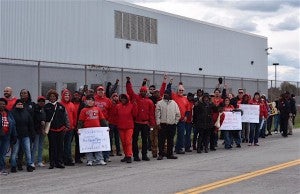 The manipulation of joint training funds began years ago when the late General Holiefield headed the union’s FCA Department and has led to the indictment of six people, including Holiefield’s widow.

During the last several months, Williams has relieved several union staff members of their duties and/or pushed them into retirement. The re-election of another union officer, Norwood Jewell, touched in the scandal was thwarted by a union caucus.

Williams, who will retire in June, has seen membership increase by 6.8% in his four years in office. Overall the union has grown by over 75,000 members since the auto industry recession in 2007–09. The 2017 growth was the highest one-year new member growth since 2010 when the economy was emerging from a deep recession.

“Our bargained contracts reflect our commitment to grow our workforce and as a result even as auto assembly and other industries may become flatter in growth during recent years, contractual hiring goals continue to be met per terms of our agreements,” noted Williams. He added,

“Over 50% of all UAW organizing campaigns were successful over the past four years. Yes, there were some high-profile challenges, but overall, we have succeeded more than we have failed in organizing campaigns and that is also reflected in our steady growth,” he added.

The nadir of UAW membership was during the recession of 2009.

(To see more about the UAW’s membership victory in the tech industry, Click Here.)

The Department of Labor numbers do not reflect the total number of UAW members. Members not reflected in these numbers include those newly organized in the process of bargaining a first contract and those in the academic sector who are represented by the UAW but have not yet signed membership cards. Including those union members in the total brings the number to well over the reported number in 2017.