RAV4 Remake Could Be Toyota’s Biggest Intro in Years 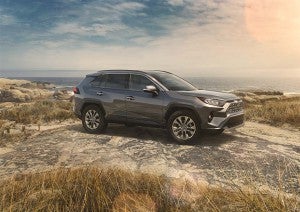 The new 2019 Toyota RAV4 gets an exterior makeover that injects passion into the design.

You don’t mess with success, goes the old adage. But there’s an alternative way of looking at things: no risk is the biggest risk of all. Or, so goes the long-time mantra at Toyota.

Which is right? We’ll likely learn in the months ahead as buyers get a look at the all-new Toyota RAV4 that’s making its debut this week at the New York International Auto Show. These days, few vehicles are more important to the Japanese giant, booming sales of SUVs propelling the RAV4 at an explosive pace. Last year, it surged past the Camry to become Toyota’s best-selling model and it was fourth overall in the U.S. market, behind only three full-size domestic pickups.

At a time when the overall U.S. market has been sliding, demand for the original “cute ute” rose 15% last year, topping 400,000, an almost unseen number anymore. So, any mistakes with the new model and you can just imagine the impact on the bottom line – and careers.

But it doesn’t look like Toyota’s product development team chose the safe route. They’ve tried to embrace CEO Akio Toyoda’s demand for more “passion” in its offerings. That includes a more sculpted shape, with a larger grille, distinctive split front lighting and even an optional two-tone paint scheme. 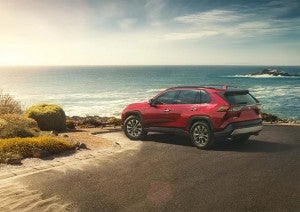 Underneath the skin is where things get interesting. Designers and engineers had to work with the Toyota New Generation Architecture, or TNGA, which will soon be shared with the vast majority of Toyota products, including the lastest-generation Prius hybrid. The dimensions of the new model are fairly close to the RAV4, the biggest difference being an added 1.2 inches of wheelbase, while the overall length in a fraction of an inch shorter.

Moving the wheels closer to the corners has its benefits, more of the total length now being devoted to passengers and cargo. We’ll have to wait for an opportunity to drive the new crossover to see if it also translates into better ride and handling though, like so many new models, the RAV4 adopts torque vectoring, a feature that’s particular useful on all-wheel-drive products that have a natural tendency to push into corners.

This is definitely not a one-size-fits-all crossover. While early iterations of the RAV4 weren’t particularly suited for anything much rougher than gravel, you have the chance to buy something that can manage a reasonably challenging trail this time around, depending upon which of three different all-wheel-drive packages you select.

Buyers can get the new RAV4 optioned several different ways, depending upon they're driving style.

On the other hand, if you like things green, but don’t want to go off-road, you have several options. You can pair the RAV4 Hybrid with the All-Wheel-Drive with Intelligence system, increasing by 30% the amount of torque directed to the rear wheels which are now electrically driven.

Toyota has long dominated the hybrid segment, but here it also takes some risk with the new RAV4, introducing the XSE Hybrid package which it bills as the “sportiest RAV4.” It pairs its electric motors with a 2.5-liter Dynamic Force four-cylinder engine. Now, add a sport-tuned suspension and Toyota claims you have both the quickest, and the best-handling version of the CUV available. 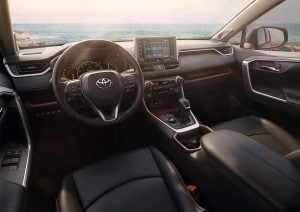 Toyota listened to complaints about the old interiors feeling too plasticky so an upgrade came it through.

That engine is used for both gas and hybrid models, incidentally, and paired with a CVT on the gas-electric model and an eight-speed automatic on conventional versions.

Inside, there are some hints of the latest Prius. Toyota has taken some hits in recent years for an excess of plastic. The new model doesn’t stray too far but it does offer a bit more sophisticated and well-appointed feel. There’s a 7-inch touchscreen or optional eight. The automaker is finally integrating Apple CarPlay while also adding Amazon’s Alexa voice assistant. There’s also onboard WiFi powered by Verizon. And Toyota’s Entune telematics system is standard. You can even opt for an 800-watt JBL audio package.

Toyota was one of the first automakers to package together an array of safety and driver-assistance technologies, such as blind spot monitoring and forward collision warning. The Toyota Safety Sense technology now adds a near-autonomous system called Lane Tracing Assist. It’s similar to Nissan’s ProPilot Assist in helping you stay in your lane, though it is not intended to be operated hands-free. Safety Sense is among the new RAV4 standard features.

(To see more about the new Yaris sedan in the portfolio, Click Here.)

Expect to see pricing and final fuel economy numbers close to the on-sale date for the new 2019 Toyota RAV4. Gas models will reach U.S. showrooms by late this year, with hybrids following in 2019.