Audi Unleashes New A6 in Geneva 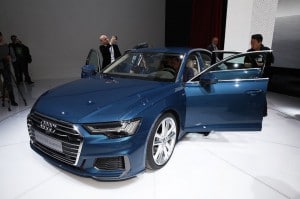 The eighth-generation Audi A6 made its public debut at the Geneva Motor Show.

When Audi finds something that works, it sticks with it. Such is the case with the new A6 that enjoyed its world premiere in Geneva. The newly introduced sport sedan is now its eighth generation.

The company calls the A6 “a distinguished ambassador for the new Audi design language.”

Which is to say that the differences between the seventh-gen A6 and the new model won’t be dramatic. It still features simple, clear edges and surfaces that aren’t fussy. It’s sporty without being a sports car and it just screams quality.

The big news with the new A6 is on the inside and its fully digital operating system. Using the new MMI touch response operating system with haptic and acoustic feedback, the user receives quick response and enjoys intuitive operation. 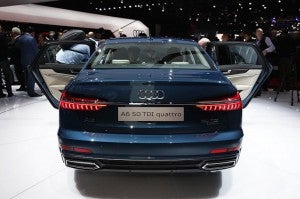 The new A6 still features the clean, crisp lines that Audi is known for while providing ample performance and comfort.

The driver manages the infotainment on the top display, which has a 10.1-inch screen if MMI navigation plus has been specified. The bottom 8.6-inch display handles climate control, convenience functions and text input; the driver’s wrist can sit on the selector lever of the automatic transmission.

In addition, the head-up display projects important information onto the windshield. MMI navigation plus also includes the Audi virtual cockpit with a 12.3-inch display.

Its extensive connectivity and assistance solutions offer even greater safety and convenience. Highlights among the driver assistance systems include the parking pilot and garage pilot, which will expand the range of options offered during the course of the year, as well as the adaptive driving assistant, Audi officials say.

The assistant supports longitudinal and lateral control, helping to keep the car in its lane even in difficult situations such as narrow lanes and construction. The Audi A6 is “as agile as a sports car and as nimble as a compact model,” the maker said.

(Click Here for details about the approved fix in the U.S. for Audi diesels.) 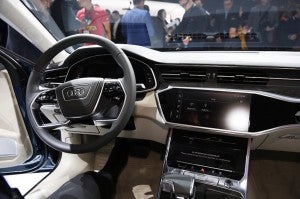 The A6 uses its new MMI system that features haptic control features, making operation of the touch-screens simpler and clearer.

This new level of agile performance is due, in part, to a new dynamic all-wheel-drive steering system, that combines direct, sporty steering response with superior driving stability while reducing the turning circle of the sedan by up to 1.1 meters or 3.6 feet. The new damping concept provides intensive yet finely differentiated feedback from the road.

Audi offers the new A6 with two engines – a 3.0-liter TFSI with 340 horsepower and a 3.0-liter TDI putting out 286 hp. Both engines are equipped with a mild hybrid system as standard. Here a belt alternator starter (BAS) works together with a lithium-ion battery. The Audi A6 can coast between 34.2 and 99.4 mph.

The start-stop function kicks in up to 13.7 mph. The engine is restarted from standstill predictively as soon as the vehicle in front of the Audi A6 starts moving. During deceleration, the BAS recovers up to 12 kW of energy. In real-world driving, the MHEV technology reduces fuel consumption by up to 0.7 liters per 100 kilometers.

The two engines are equipped as standard with the quattro all-wheel drive, whose design varies depending on the specific setup.

In conjunction with the tiptronic it comes with the self-locking center differential; in tandem with the S tronic the setup features even more efficient ultra technology, which always activates the rear-wheel drive instantly whenever needed. All gearshifts are automatic, Audi notes.