Toyota scores, however, with a tug on the heartstrings. 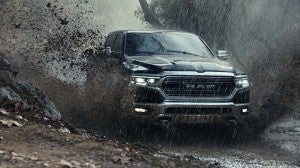 Getting muddied up: Ram's 60-second commercial was hit for its use of a Rev. King speech.

Trying to select the winners among the ad fest also known as Super Bowl is, at best, an inexact science, but one thing virtually every Monday morning commercial quarterback seems to agree on is the spectacular fail of the spot by Fiat Chrysler’s Ram division.

It’s not that the truck brand didn’t follow FCA’s formula proven out over much of the past decade, a longer-form spot pairing dramatic words and images aimed at building to a higher calling than crass commercialism. Since the Italian-American automaker’s first spot, featuring rapper Eminem twinning the themes of Detroit’s and Chrysler’s comeback, its ads have frequently been the Super Bowl’s most eagerly awaited and subsequently talked-about commercials.

The Ram ad on Super Bowl LII is also generating a lot of buzz, but most of it is not what the truck brand’s marketing team aimed for. In both social and mainstream media , the decision to use a 50-year-old speech by the late Rev. Dr. Martin Luther King Jr. drew comments like “tasteless” and “cheesy,” one Facebook user suggesting it inadvertently “mock(ed) every FCA manifesto ad that came before it.”

It’s become a sport of its own to measure the response to Super Bowl ads. And no surprise, considering some less-than-diehard viewers really couldn’t care less about what happens on the field. As one Sunday comic strip suggested over the weekend, many folks wind up watching the commercials and going to the bathroom or grabbing snacks in the kitchen during the game. 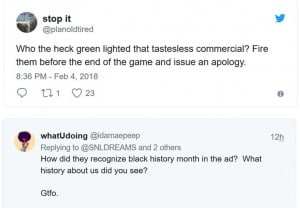 Many manners of measurement are tried by different organizations hoping to see which spot struck the most resonant chord: from asking panels of viewers to dial or type in a number reflecting their responses to hooking up lie detector-style physical monitoring devices. Those who focus on tracking reactions to automotive ads monitor such things as the frequency in which carmakers see their products viewed online after a commercial runs.

USA Today, which was one of the first to follow the Super Bowl ad metrics, had good news for Toyota, which was unusually active in game LII, running three brand ads. That included one spot that, for the first time, didn’t feature any of the Japanese automaker’s vehicles. Rated fifth best spot overall by the newspaper, it focused on a Paralympian with no legs below the knee and only one complete arm. The commercial focused on both Toyota’s sponsorship of the Olympics and Paralympics, and the company’s focus on mobility services and technologies.

The heartstring-tugging ad was hailed by viewers in a number of other studies, including Thrillist, which ranked it fourth of the 41 spots it tracked during the game. But the online service put the Ram ad dead last. 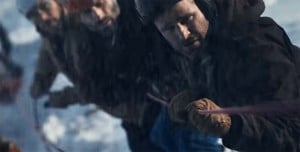 The spot aimed to show how Ram trucks are used in the service of country and community.

As it did in many prior long-form commercials, the truck brand aimed to deliver a higher message that also helped sell product. Parent FCA invented the format and has relied on some well-known voices over the years, whether those speaking, like Eminem and actor Clint Eastwood, or those whose words anchor the spots, such as newscaster Paul Harvey and, this year, Rev. King.

One of two for Ram – and five for FCA overall – it was titled “Built to Serve” and, explained the automaker, “supports a core belief of the Ram Truck Brand, and Ram truck owners, that true greatness is achieved by helping others.”

In this case, it paired a speech given by the civil rights leader exactly 50 years to the day before in which he declared ““everybody can be great because everybody can serve.”

But what came across to many observers, both professional and consumer, was seen as little more than a crass way to try to sell the new 2019 Ram 1500 pickup. 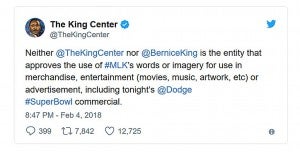 “They pushed it over the edge,” Kelly O’Keefe, a professor at Virginia Commonwealth University’s Brandcenter, told the Associated Press. “You wanted to root for it because the cause is good, but it just didn’t end up fitting the brand, so you ended up feeling a little bit manipulated.”

For its part, Ram quickly went on the defensive, explaining that the company “worked closely with the representatives of the Martin Luther King Jr. estate to receive the necessary approvals and estate representatives were a very important part of the creative process every step of the way” in the commercial produced by new Chicago boutique ad agency Highdive.

(Lexus goes the superhero route with Super Bowl spot for new film, “Black Panther.” Click Here to check it out.) 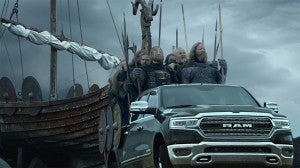 Ram got a better reception to a humorous spot built around Vikings.

Maybe so, but not everyone within the extended network of King family individuals and organizations was pleased. The King Center, founded by the late leader’s wife Coretta Scott King, issued a tweet asserting that it was not involved in “the use of MLK’s words or imagery.”

Not everyone was critical. Some saw an effort, as BigShirley tweeted, “to show respect to black ppl, military and sell their product. Maybe it wasn’t perfect to you but I’m not offended that they tried.”

It wasn’t a complete washout for FCA. The automaker scored better with a second Ram 1500 ad featuring Vikings, as well as one of its commercials for the all-new 2018 Jeep Wrangler. But the uproar over the King-Ram spot dominated the evening.

(Audi had its own spectacular fail with a 2017 ad suggesting men should choose a bride like they do a used car. Click Here for more.)