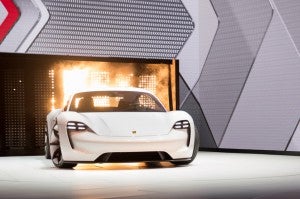 The Porsche Mission E is set to hit U.S. dealer showrooms next year, just as new Level 4 chargers are available.

With its first battery-electric sports car, the Mission E, soon to roll into U.S. showrooms, Porsche said today it will add ultra-fast Level 4 chargers at all 189 of its American dealerships.

That’s on top of the nationwide charging network that parent Volkswagen AG is funding as part of its settlement for cheating on diesel emissions test. VW intends to install 2,800 electric chargers nationwide, though with a heavy emphasis on the EV-friendly California market, its Electrify America project backed by $2 billion in funding.

“Charging infrastructure is an extremely important part of the EV experience as a whole,” said Porsche Cars North America CEO Klaus Zellmer, in a blog post that first was released to USA Today.

The new Porsche charging system will be doubly significant in that they will be able to operate at up to 800 volts, or twice the power of the current Level 3, 400-volt DC, chargers popping up around the U.S. This appears to mark the first time anyone has installed Level 4 systems in the U.S., though several charging companies have said they are developing plans for similar systems.

(Plug-in sales surge past 1M for first time as demand jumps in U.S. Click Here for the story.) 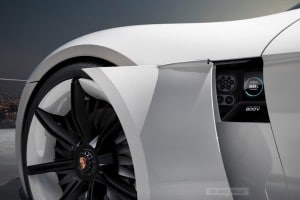 Using the new Level 4 chargers at dealerships, the Mission E can get a full 250-mile charge in 20 minutes.

Few, if any, of the electrified vehicles currently on the road can use that level of power, though a number of European manufacturers, including the broader Volkswagen Group, Daimler AG and BMW, have jointly said they plan to add that capability.

Level 4 systems could help shift the discussion about electric vehicles because they can massively shorten the time it takes to charge a battery-car. Porsche claims that, when the Mission E debuts in 2019, the sports car will be able to add 250 miles to its range in just 20 minutes. Level 3 systems can deliver less than half that additional range and more common Level 2 systems, which operate on 220 volt AC power, would need as much as four to five hours – and sometimes more – to recharge a 250-mile battery.

That said, CEO Zellmer noted that Mission E owners likely won’t turn up at Porsche showrooms very often. It is widely expected that most EV owners will continue to rely on slower, Level 2 systems for most of their charging needs. By plugging in overnight they would be able to refill even long-range batteries – and take advantage of special overnight charging rates that many U.S. utilities are now offering for battery-car owners.

But for those on the go, especially those who might be traveling and not have easy access to charging, the Porsche dealer network could make the ownership experience more seamless. And that will become even more important going forward, as Porsche this month announced that it will phase out diesel engines from its future line-up and shift to battery-powered vehicles.

What Porsche is not yet saying is what owners might have to pay to use the Level 4 chargers. Some manufacturers, including Tesla and Nissan, have made free use of public chargers a part of their sales pitch. But electricity isn’t free, especially during the day, and while basic, Level 2 chargers have fallen in price, high-speed systems are still quite costly. According to industry sources, a Level 3 charging station can top $50,000 per plug. Level 4 technology is expected to be substantially more costly.

The automaker is still exploring a variety of options for pricing, Stefan Weckbach, head of battery electric vehicles at Porsche, said in the blog post.

Ferdinand Porsche, the carmaker’s namesake and founder was an early pioneer of electric propulsion, building a primate plug-in hybrid more than a century ago. Porsche showed the potential performance benefits of electrification with its 918 plug-in hybrid supercar, following it with a Mission E concept.

(To see more about Porsche walking back its “no more diesels” declaration, Click Here.)

Since confirming production plans it has revealed it is spending $1 billion to develop the four-door sports car which it plans to price at $85,000. It has targeted 0-60 mph launch times of under 3.5 seconds, with the Mission E delivering a range of 310 miles and a top speed of at least 155 mph.