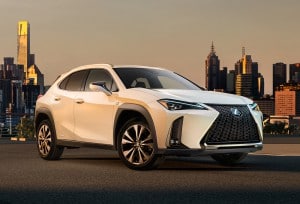 Lexus eliminated all of the mystery heading into Geneva by offering up a full view of the new UX.

Little more than a week ahead of its official debut at the Geneva Motor Show, Lexus is offering up its first view of the new UX “urban crossover.”

It’s a slightly toned-down version of the UX unveiled at the Paris Motor Show in autumn 2016, Lexus at the time insisting it was only a concept, though it was immediately apparent the automaker wanted to dive into one of the world’s fastest-growing product segments.

“These first visuals reveal the UX’s bold and stylish design that blends expressive bodywork with a compact size,” the Japanese automaker said in a release accompanying these images. “Its crossover credentials are signaled by its muscular haunches and high beltline, yet underneath the skin there’s an all-new platform that gives the UX exceptional body rigidity and a low center of gravity for exceptional handling.”

This front view follows a recent teaser showing the back end of the Lexus UX, albeit a view carefully shadowed to hide many key details. But it did suggest that while Lexus has refined the concept crossover’s edgy styling, it apparently carries over the subtle fins shown on the original show car. 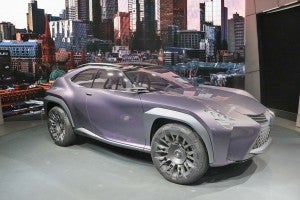 The styling renaissance at Lexus carried on with the UX Concept, although its a "concept" no longer.

Up front, there are slit headlights framing the seemingly ever-larger Lexus spindle grille, strong shoulders and a deeply sculpted hood,

While we can’t see much of the interior, Lexus says the UX gets a wide and “highly focused driver’s cockpit” – clearly influenced by the new LF-A — with an interior that’s larger than the exterior footprint might suggest. And it features a mix of new technologies, including the brand’s latest user interface for its infotainment system.

What’s under the hood, well, Lexus apparently wants to save some news for the Geneva unveiling on March 6th. But a careful examination of an earlier teaser image revealed the UX adorned with a 250h badge, indicating a hybrid version of the new ute is in the plans.

The automaker has reportedly trademarked a number of nameplate variants and may launch with a base UX 200 model, as well as a more sporty and well-equipped UX 250. The addition of a gas-electric UX 250h would fill a gap left open by the departed CT hybrid.

The UX will be entering a rapidly growing segment of the luxury SUV segment with familiar entries like the BMW X2, as well as new models like the Volvo XC40 and Audi Q2.

Intended to be a “gateway model” for the brand, the Lexus UX becomes the fifth in a growing line-up of crossover vehicles, though the familiar RX still dominates. That midsize model is, in fact, the best-selling product to carry the Lexus badge.

Don’t expect Lexus to stop here, however, as was made apparent during the North American International Auto Show in Detroit last month. As with the 2016 UX Urban Crossover Concept, the Lexus LF-1 Limitless Concept is not officially scheduled for production, but senior company officials have made it abundantly clear they want it – and the sooner the better.

U.S. brand boss Jeff Bracken told TheDetroitBureau.com he would love to have a production version to “fill a gap” in the Lexus line-up. And serve as the SUV counterpoint to the marque’s current flagship sedan, the big LS. Sources hint we could see the LF-1 land in showrooms by around 2020.