It's green at the Chicago Auto Show this year. 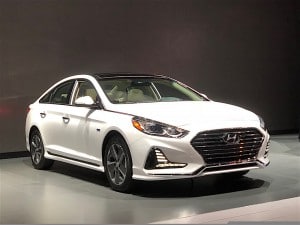 The new Hyundai Sonata comes as a hybrid and plug-in hybrid version for the 2018 model year.

There may be plenty of white stuff swirling around the frigid Windy City, but it’s green inside Chicago’s McCormick Place convention center – at least if you’re at the Hyundai stand.

The Korean carmaker has been slow to embrace new battery technologies but it’s making up for lost time. It’s planning to add a veritable blizzard of battery and hydrogen-powered models during the next five years, and the rollout gains momentum with the launch of both conventional hybrid and plug-in versions of the midsize Hyundai Sonata sedan at this year’s Chicago Auto Show.

“When combined with Hyundai’s outstanding value and efficiency, the new Sonata Hybrid and Plug-in are sure to attract even more eco-focused buyers,” said Mike O’Brien, vice president of Product, Corporate and Digital Planning at Hyundai Motor America.

To further enhance the appeal of the battery-based pair, O’Brien noted, Hyundai is also making a number of exterior and interior upgrades, and adding more features to the Sonata Hybrid and Sonata Plug-in Hybrid models. 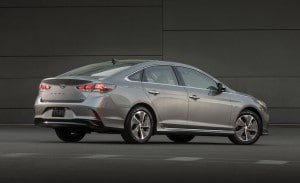 The new Sonata hybrid reflects the company's effort to offer diverse powertrains throughout its line-up.

The electric motor is housed within the body of a newly-designed six-speed automatic transmission, replacing the conventional torque converter. It can completely decouple the gas engine to save fuel. To further enhance the drivetrain’s efficiency, Hyundai opted for an electric oil pump.

Unlike past hybrids, the new model opts for a more energy-dense 1.76 kilowatt-hour lithium-polymer battery that allows for a flat cargo load floor.

The 2018 Hyundai Sonata Hybrid is rated at an estimated 39 mpg City, 45 Highway and 42 Combined. And the automaker estimates a range of 650 miles between fill-ups.

As for the 2018 Sonata Plug-In Hybrid, it upgrades the battery pack to 9.8 kWh, allowing up to 27 miles of driving in all-electric mode. And it can charge up, Hyundai claims, in “less than three hours” using a 240-volt Level 2 charger. 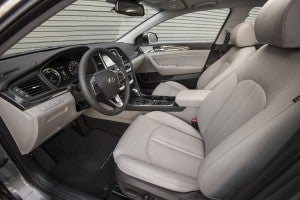 The interior of the new Sonata features an 8-inch touchscreen.

The basic design of the drivetrain is similar to that of the new Sonata Hybrid but it opts for a more powerful, 67 hp electric motor – almost one-third more than in the standard hybrid – allowing the PHEV version to drive entirely on battery power even at highway speeds.

(Click Here for details about our first drive in the 2018 Sonata.)

Other tech upgrades range from a slew of USB ports to a hands-free trunk system that can pop open automatically. An 8-inch touchscreen for the infotainment system features both Apple CarPlay and Android Auto. The new models also feature an upgraded BlueLink telematics system and can be integrated with both Google and Amazon voice assistant technologies.

Visually, the two hybrids get a number of tweaks, starting with unique front and rear fascia, unique hood, front fenders, deck lid and front and rear lamps. The LED headlights feature cornering capability to improve visibility during a turn.

There are even some updates to improve ride and handling, including a stiffer front anti-roll bar and tweaks to the rear suspension.

Though most Hyundai Sonata models sold in the U.S. are currently being produced locally, the two electrified versions will be imported from a plant in Asan, Korea. Look for the hybrid to roll into American showrooms in the coming weeks, with the plug-in to follow during the second quarter of this year.