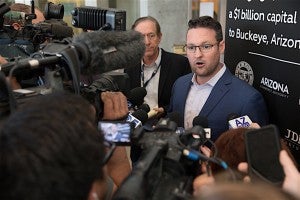 Nikola Motor CEO Trevor Milton talks about the company's plans to build a $1 billion facility near Phoenix for its hydrogen fuel cell trucks.

The competition to produce electric semi trucks is getting a little more intense with Nikola’s announcement that it plans to build a $1 billion, 1 million-square-foot facility just outside Phoenix to build its hydrogen fuel cell trucks.

The company claims to have 8,000 pre-orders for its two trucks, the Nikola One and Nikola Two. The One is a sleeper cab while the Two is a day cab only. The plant is expected to be complete by 2024, although it’s not clear when company will begin producing trucks before then.

“We will begin transferring our R&D and headquarters to Arizona immediately and hope to have the transition completed by October 2018,” said Trevor Milton, CEO and founder, Nikola Motor Co.

“We have already begun planning the construction for our new zero emission manufacturing facility in Buckeye, which we expect to have underway by the end of 2019.”

The Nikola One heavy-duty rig will be able to travel up to 1,200 miles on a tank of hydrogen.

While the plant is being built Fitzgerald Gliders, a trucking components company will produce the first 5,000 production models at its facility in Crossville, Tennessee.

Much like electric cars, the number of players in the truck segment is growing with a mix of newbies, i.e. Tesla and Nikola, and established players, such as Paccar and Cummins. Tesla was the first of the group to bring a working model to the public.

Palo Alto, California-based Tesla unveiled its truck to the world in splashy ceremony last fall with CEO Elon Musk telling the world the truck would be ready in 2019. A flurry of orders for the battery-electric beast flew in from companies ranging from Walmart to Pepsi.

(Click Here for details about Toyota’s plans for a hydrogen semi truck.)

However, there is some differentiation between the two electric leaders: Tesla’s trucks max out at about 500 miles, while Nikola’s are designed to be true long-haul road warriors, able to travel 1,200 miles before needing to refuel.

The company plans to lease the trucks to users – no pricing was available for the announcement – and as part of the deal, Nikola will supply fuel as part of the lease cost through a nationwide network of 376 hydrogen fueling stations. It still has to build the network.

Nikola said the trucks are rated at 1,000 horsepower and 2,000 pound-feet of torque, which analysts said fits the need for long haul trucking. Unlike during the Tesla presentation, no 0-to-60 time was provided.

In terms of fuel cell Class 8 trucks, Toyota and Kenworth, through Paccar, are developing hydrogen fuel cell prototypes while the aforementioned Tesla, Daimler Trucks, Volvo Trucks, Navistar and Cummins are working on electric trucks that could compete with fuel cell commercial vehicles.