Mazda’s SkyActiv-X Aims to Give Diesels, Hybrids a Fuel-Efficient Run for the Money

More torque and from 20-30% better mileage could make SkyActiv-X a real breakthrough. 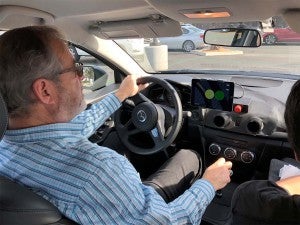 Driving the Mazda3 with a prototype of the SkyActiv-X engine revealed the vehicle's proposed improvements to be true.

It looks like the familiar Mazda3. Well, almost, if you ignore the matte black paint, the jury-rigged gas cap cover and a few other odd retrofits. Inside, there are a couple of plastic tubes sticking out of the air vents that look, oddly enough, like the arms on the robot from the old TV show, “Lost in Space.”

There’s also a tablet computer bolted to the instrument panel that tells you this is more than just a junker someone picked up and patched up so they might have a cheap set of wheels. As we fire up the hatchback the screen displays a big green circle with the number “1” in the middle. But as we pull out of the parking lot another circle lights up, “2” it tells us before a third circle briefly flashes on and off a couple times with the number “3.”

No, it’s not some sort of upshift warning light. The display is intended to show which mode the hatchback’s engine is operating in. That’s because it’s a prototype version of the new Mazda SkyActiv-X and the more you can keep those twos and threes flashing the more fuel you are saving, explains the Mazda engineer who has come along for an hour-long test drive starting at the Japanese automaker’s U.S. R&D facility in Orange County, California.

SkyActiv is a broad term coined back in 2007, when Mazda announced plans for an array of energy saving technologies. It’s often associated with the maker’s current gas and diesel engine families, more accurately known as SkyActiv-G and SkyActiv-D, as well as a super-efficient automatic transmission. But it also takes in such things as the platforms used for the latest Mazda products which have been developed to be especially strong and light. SkyActiv is, as much as anything, a development philosophy that covers such things as water pumps and even the lightened lug nuts Mazda engineers developed.

SkyActiv-X is the latest development and it could come as a bit of an embarrassment to bigger manufacturers like General Motors who have spent years trying to perfect a technology known as homogeneous charge compression ignition, or HCCI. Think of it as a diesel engine running on gasoline. 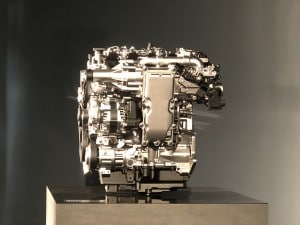 The new SkyActiv-X engine from Mazda provides an increase in torque and as much as 30% improvement in fuel efficiency.

Unlike a gas engine, diesels don’t use spark plugs. Instead, they rely on high compression ratios to get their fuel to spontaneously ignite. GM and other makers have been toying with the concept but they can’t get their prototypes to operate in HCCI mode for very long, limiting the benefits, and there’s typically a rough transition when they switch back and forth between spark and HCCI modes.

In the truest sense, Mazda hasn’t quite pulled off the impossible. SkyActiv-X engines do have a spark plug. In a complex process that the maker won’t yet discuss in detail, it compresses a gas-air mixture to a ratio of 16:1, or nearly double the compression ratio in most engine running on 87 octane fuel. By blowing in multiple whiffs of fuel through special injectors and then igniting just a part of the gas-air mixture, Mazda Vehicle Dynamics Engineer Dave Coleman claims the SkyActiv-X essentially achieves the same results as an HCCI. Most of the mixture instantly ignites from the extra pressure.

And here’s what matters most: though Mazda is still making some final tweaks, tests project fuel savings of anywhere from 20 to 30% compared with a conventional gas engine. That puts the SkyActiv-X in the range of today’s best diesels and even some gas-hybrids.

But that’s not all. Like a diesel, the SkyActiv-X makes a lot of torque, and those pound-feet come on low in the RPM range, so the 178 horsepower, 170 pound-foot rating for the 2.0-liter package might actually not fully represent the engine’s real pulling power. 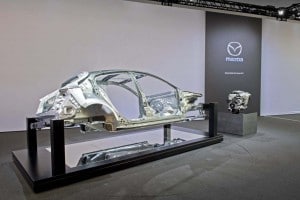 The new Mazda3 platform updated to handle the SkyActiv-X engine could see the roads this fall.

Or so we quickly discover as we wander through Orange County, putting the prototype through its paces on city streets and on some of the fast toll roads that cut through the canyons of the OC.

Before heading out, Jay Chen, a lead development engineer, pointed out that the SkyActiv-X wants to rev higher than a conventional Mazda3 engine. It’s like being in Sport Mode, he explained, one gear lower than you might normally choose for maximum mileage. Except running at 3,000 RPMs, rather than 2K doesn’t have any impact on fuel economy. But it does deliver an unexpected sense of power as we launch off a stoplight, and then later execute a quick freeway pass at 70 mph.

The three engine modes signaled by that tablet on the dashboard can be thought of as efficient, really efficient and, “are we burning any gas at all?” In fact, they basically illustrate how lean the engine is operating. When there’s a “3” lighting up the cylinders may be getting fed five, 10, even 20 times more air than fuel, a concept known as “lean burn.” Safe to say that the more you operate that way the better.

With plans to bring the SkyActiv to production in barely a year, Mazda engineers are spending their term finalizing the tuning, so even the final compression ratio may differ by then – and it will vary from country to country, Chen explains.

There are still a few bugs to squash. Every so often we hear a clattering from under the hood. It’s the SkyActiv-X equivalent of engine knock. That should be gone before production begins, we’re promised.

Pulling together the package – which Mazda has christened SPCCI, or Spark Control Compression Ignition – hasn’t been easy. And there’s a lot of technology hanging on that block, including a supercharger and a mild hybrid system. As with a diesel, the SkyActiv-X is more noisy than a regular gas engine, so that requires a sound-deadening system under the hood, something Mazda refers to as “encapsulation.”

(Click Here for more about Mazda and Toyota’s new shared plant in Alabama.)

So, in a Q&A session after our drive, we ask how all that will drive up the cost of the new system. And that’s when we’re handed another surprise by Senior Vice President Robert Davis. “The challenge we’ve been given is to keep the cost the same” as the current SkyActiv-G powertrain, he says.

One way to hold down costs, by the way, is by sticking with a fairly mundane six-speed automatic transmission, rather than the expensive eight, nine and 10-speed gearboxes other makers are rapidly migrating to. Credit the flat torque curve for that.

We’ll obviously have to wait to see if the promises of the SkyActiv-X we drove this week matches up with the production model to come. What’s encouraging is that the Mazda team said they’re targeting real-world performance and efficiency, rather than tuning the new engine just to pass EPA fuel economy tests. That’s the dark secret a lot of manufacturers don’t talk about. Reality is that many of today’s turbo engines – especially when tucked under the hood of heavier vehicles – don’t come close to delivering what’s been measured in the dyno lab.

We’ll have to wait for SkyActiv’s final mileage numbers, as well as the ultimate horsepower and torque figures, but if we get anything like what we’ve been told – and what we’ve experienced on our drive – this could be an impressive breakthrough by a little David that has accomplished Goliaths have yet to pull off.

But the SkyActiv-X engine isn’t the only thing that impresses us. Our jury-rigged hatchback has more to tell us about what’s coming from Mazda. As Coleman explains, Mazda has done a lot more work on the SkyActiv platform that will go into the next Mazda3 – and other vehicles in its line-up.

That includes the sort of steps you’d expect to make the chassis stiffer and handle better. But some of the suspension revisions have been designed to effectively smooth out bumps. As a video shows, there’s a lot less head-tossing when you hit a pothole, something we folks living in winter-ravaged Michigan can appreciate.

(To see more about the importance of the update for new Mazda6, Click Here.)

And when will we see all this in showrooms? The Mazda folks aren’t talking but it’s clear they’re down to final tuning for both the updated platform and the SkyActiv-X engine. We’re expecting to see something in showrooms late next year, likely as a 2020 model.