Niro derivative expected to deliver over 100 miles per charge. 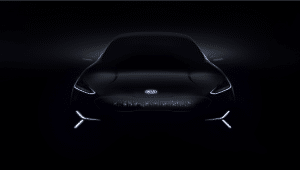 Kia's offered a teaser look at its latest concept vehicle, which will debut at the Consumer Electronics Show next week.

Kia plans to reveal an all-electric concept vehicle during a news conference at the Consumer Electronics Show in Las Vegas next week.

CES 2018 will see a flood of presentations by automakers as they reveal what they expect to be tomorrow’s breakthrough technologies, with an emphasis on electrification, autonomous driving and mobility services. Kia will not only roll out an EV concept but also show its “vision” for other technologies and services, the company said.

“Virtual reality, self-driving cars, and full vehicle connectivity were all once considered technologies of the distant future,” said Woong-cheol Yang, vice chairman and head of Hyundai-Kia R&D Center. “As they rapidly become a reality, Kia is exploring how to adapt these new technologies for its customers. At CES we will share our strategy and vision for future mobility, and exhibit a range of advanced technologies that our customers can look forward to.”

Though the Korean carmaker is offering few details ahead of CES, the Kia EV concept is expected to be based on the same platform as two of the maker’s current electrified models: the 2017 Niro Hybrid and the Niro Plug-in Hybrid it has just launched for the 2018 model-year.

(Hyundai, Kia see pressure on sales in 2018. Click Here for the story.) 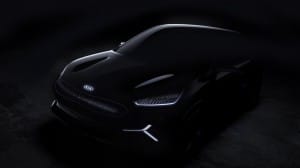 Kia's Niro EV concept is said to travel more than 100 miles on a charge.

Kia isn’t revealing any details about the EV concept, except to say it will utilize a “highly efficient battery-electric powertrain.”

But it is not expected to deliver the sort of extended range of products like the new Tesla Model 3 or Chevrolet Bolt EV. One reason is that the current Kia Niro shares platforms with Hyundai’s Ioniq line. That includes a pure EV model equipped with a relatively modest 27-kilowatt-hour battery. That’s enough to get just 110 miles per charge, half of what Bolt can deliver and about 40% less than the second-generation Nissan Leaf, now rated at 150 miles per charge.

Specific production plans for the Kia EV Concept could be revealed in Las Vegas. Kia is also expected to discuss some of the other technologies that will be featured on the CES prototype.

(Click Here to see how Kia is ready for the utility battle with new Sorento and Niro.) 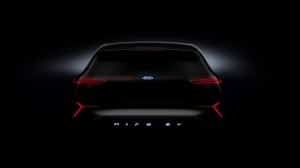 Kia's not only showing off its new EV concept at CES, it plans to lay out plans for the use of future technologies.

The two Korean carmakers were slow to enter the electrified vehicle segment but are racing to catch up with leaders like Toyota, General Motors and Volkswagen. They are also pushing to enter other emerging segments, such as autonomous driving.

Also on Thursday, Hyundai-Kia tech chief Yang announced that Kia’s larger sibling, Hyundai, would enter into a partnership with Volkswagen and San Francisco-based start-up Aurora to develop autonomous and self-driving vehicles. Aurora is headed by Chris Urmson who once ran the Google self-driving vehicle program.

It is unclear if Kia may also join that new alliance, as it often shares technologies with Hyundai.