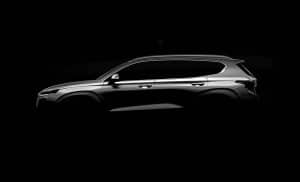 Hyundai is offering a sneak peek at its 2019 Santa Fe sport-utility vehicle, which will debut in Geneva.

Hyundai is betting big, going forward, on SUVs and may soon add a pickup to its line-up, as well. But few vehicles are more important for the Korean carmaker than the Santa Fe, currently the biggest ute in its line-up.

What Hyundai is pointedly calling its “New Generation Santa Fe” is set to make its debut at the Geneva Motor Show coming up in March, and an official teaser image, as well as some spy shots and reports out of Korea suggest we’ll see some notable styling updates, as well as a suite of new safety features.

The new line-up of safety technology includes not only a new collision warning system with auto-braking but also what it is calling Rear Occupant Alert Monitor. It keeps an eye on “the rear seats to detect passengers and alerts the driver when leaving the car.” The idea, apparently, is to prevent the car from driving off inadvertently.

There are two utes in the current Hyundai line-up, including the smaller Tucson. But with utility vehicles now accounting for half of U.S. new car sales, and a growing share of the global market, the Korean company will be expanding its mix over the next several years, starting with the new Kona electric model. It’s even working up a production version of the compact Santa Cruz pickup that was a hit, in concept form, at the Detroit Auto Show a few years back.

(Hyundai reported lower profits in 2017 as sales suffered in most markets. Click Here for the story.) 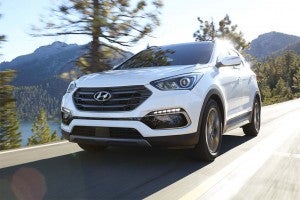 Hyundai is planning a substantive makeover of the 2017 Santa Fe Sport for the next-gen ute.

But the Santa Fe is a critical offering and needs a major refresh. The image here appears to be of the standard version of the ute, rather than the smaller Santa Fe Sport model.

Visually, the teaser suggests the 2019 Santa Fe might grow ever so slightly, especially in light of some reports from Korea. That has included talk of a new rear bench that would expand seating to eight from the current seven.

What we can’t see could be where some of the biggest changes to the 2019 Hyundai Santa Fe take place. The grille is expected to grow even larger and while it will retain the current shape it may adopt a honeycomb design. There will be new LED headlamps, at least as options, the front lights now split into two separate units, according to those Korean sources, in something of a nod to the previous Jeep Cherokee design. Running lights, spy shots indicate, will sit directly below the hood, framing the grille.

(Click Here for details about Hyundai’s new Veloster and the “N.”)

Several powertrain packages are likely, with an emphasis on a V-6 for the bigger model and an inline-four for the Santa Fe Sport. Hyundai has been pushing fast to electrify its line-up, as the addition of the Ioniq and the upcoming Kona demonstrate. Few would be surprised to see some sort of battery-based package added to the Santa Fe line-up over the next few years.

We’ll have to wait to see what’s in store for the smaller Santa Fe Sport but there have been some hints that Hyundai might rejigger its nameplates, perhaps even rechristening the three-row model the Veracruz. That’s what it called an earlier – and largely forgotten – model dropped back in 2012. 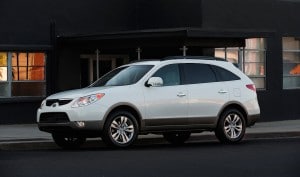 The Hyundai Veracruz was the automaker's first SUV offering with a third-row seat.

Expect to see more advanced driver assistance systems, or ADAS, included under the Smart Sense umbrella. That includes not only the new Rear Seat Occupant Alert but an updated version of Rear Cross Traffic Monitoring that will automatically apply the brakes if the driver tries to back up, say, out of a mall parking spot, into oncoming traffic.

Safety tech has become a major differentiator among brands, especially in segments appealing to family buyers, such as three-row SUVs.