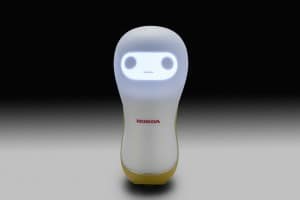 Honda's 3E-A18 robot displays simple and easy-to-understand facial expressions and can be touched, even hugged, by humans.

Forget BB8, R2D2 and C3PO. Honda’s new 3E robots are there to help you get your work done and, if you’re feeling a little blue, to give you a hug.

The Japanese automaker has spent nearly four decades developing humanoid robots like the bipedal ASIMO which can walk, talk and even pour a cup of coffee. But Honda is also working on more practical robot designs dedicated to specific tasks, like the 3E-D18, which can be put to use at a construction site, for fighting fires or on search-and-rescue missions.

“We have entered an era when robotics will become increasingly visible and essential in our everyday lives and have the ability to unlock human potential,” said Yoshiyuki Matsumoto, president & CEO of Honda R&D. But, “Honda views robotics not as something in conflict with people, but as an opportunity to expand their potential.”

The company showed off four of the robots it’s working on at the Consumer Electronics Show in Las Vegas this week. The “3E” designation, said Matsumoto, stands for “empower,” “experience” and “empathy,” and each of the robots takes a different approach to incorporating those three missions.

The 3E-D18 is meant to be a workhorse at places like construction sites, Think of it as a sort of mini all-terrain vehicle, with four airless tires and all-wheel-drive. At CES, Honda demonstrated its potential by climbing over an obstacle that would trip up most robots.

It’s more of an automated platform than a robot in the traditional sense. And all sorts of things could be mounted to the rails on top of 3E-D18, from construction gear to a stretcher for helping rescue crews bring out an injured skier or hiker. But its onboard AI and GPS would allow the robot to shuttle back and forth without a human operator.

Honda has been looking at ways to use automation to assist the handicapped. It showed off at CES a device that could be worn on the hips to make it possible for the elderly or disabled to walk and even climb stairs.

The 3E-B18 has a similar mission. It is something of a robotic wheelchair but can traverse terrain that traditional wheelchairs might have trouble with. It also can be converted to serve as a luggage cart or even a stroller.

“Its compact size and ability to turn in a small radius enable it to navigate in tight spaces, while the height-adjustable seating features a function to maintain a level seat even when it is driven uphill or downhill,” Honda explained. “3E-B18’s narrow footprint allows it to maneuver as flexibly as a pedestrian so that it can be used in many locations.”

(Click Here to get details about Toyota’s Human Service Robot.)

The Honda 3E-C18 is something of a personal assistant, “supporting the activities of entrepreneurs, artists, and others who are seeking new ways to create value for society,” noted Honda. It has an AI platform capable of observing how people act and respond to them or operate entirely autonomously. It can carry things on its squat, mobile body.

If the 3E-C18 is Honda’s equivalent of R2D2, the 3E-A18 is its C3PO. Shaped something like an old-fashioned lightbulb, it features an expressive “face” and can roll around on an omnidirectional wheel.

Honda’s best-known robot is ASIMO, and it was put to real-world use during the disastrous earthquake and tsunami that struck Japan earlier in the decade.

But Honda discovered that one thing people in the disaster zone wanted to do was give ASIMO a hug, recalled Tsutomu Wakitani, the head of Honda’s R&D Center X, which handles robotics development. ASIMO wasn’t designed for that, so the X team came up with 3E-A18 instead.

“It was designed for people to touch,” Wakitani explained.

(To see more about Honda offering some Insight, Click Here.)

Exactly when these robots will be put into production is unclear. But Honda is trying to show that robots will find a wide range of assignments in the future, and not just along the assembly line.