“Hey, Mercedes!” German Maker Lets You to Have a Conversation With Your Car 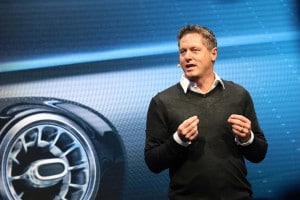 Most of today’s cars are now equipped with voice recognition systems that can be used to pair a phone, change the radio station or enter a destination. But the systems are often balky and require motorists to learn arcane commands.

Mercedes-Benz says it will make the process easier, more intuitive and more accurate with the debut of its new MBUX infotainment platform, a technology senior officials not-so-modestly dubbed a “revolution” during its debut at the Consumer Electronics Show in Las Vegas. Set to debut on the next-generation A-Class model next month, the Mercedes-Benz User Experience will let you have “the best conversation you’ve ever had with a car,” said Ola Kallenius, a board member with Mercedes’ parent, Daimler AG.

The new system is more in line with new voice assistants, such as Amazon’s Alexa and Google Home. MBUX can recognize more conventional speech and even figure out that when you ask if you can wear flip-flops to the beach tomorrow that you actually want to know what the weather will be like.

The system is designed to adapt to a user’s needs and can do things like recognize the roads you prefer to drive on, as well as the type of food you might use it to search for, offering up the local Chinese or Italian restaurants when you’re looking for a place to grab a bite to eat.

(Mercedes-Benz tops in global luxury vehicle sales for 2017. Click Here for the story.) 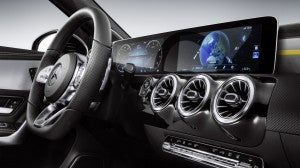 The new MBUX infotainment system by Mercedes-Benz features allows for more casual language to be used for commands.

Mercedes was one of the first automakers to build an infotainment system into its vehicles. It has steadily expanded the features that could be operated by its earlier COMAND system, while also introducing new ways for a motorist to interact with the technology. The latest S-Class sedan, for example, features a controller knob on the center console, a small touchpad on top of it, additional controls on the steering wheel and a touchscreen. Like competing systems, COMAND also allows a user to give carefully worded voice commands.

The new MBUX system continues to offer a motorist those various ways to input commands, but the biggest breakthrough is the introduction of natural speech. It is so intuitive that the built in What3Words software can understand abstract requests to find an address. “My cool sneakers” could be used to call up a shoe or athletics supply store.

The system will be able to operate in 23 different languages and, by using the same sort of over-the-air updates as today’s smartphones, Sajjad Khan, Mercedes’ Digital Vehicle chief, promised MBUX will be able to understand the latest slang.

(Click Here for the first look at the new Mercedes-Benz G-Wagen.)

“You can have a chat with your car almost like you do with the people riding with you,” Khan said, during a CES 2018 news conference.

The new infotainment system gets a significant visual makeover, as well. There are new, three-dimensional graphics that illustrate what individual commands do. When adjusting headlight settings, for example, the rotating images actually demonstrate what the effect will be.

Behind the flashy displays and slang-talking software, MBUX runs on some extremely sophisticated hardware, including a 4-core microprocessor, new NVIDIA graphics chips and lots of RAM. The automaker contends it has also integrated the latest security technology to thwart hackers.

MBUX users will also be able to access third-party services, such as Yelp or Trip Advisor, and a motorist will be able to bypass the built-in voice assistant to access Alexa or Google Home. That will allow a user to do things like accessing home automation systems.

(To see more about the new user experience, Click Here.)

The new infotainment system will first appear in the next-generation Mercedes-Benz A-Class which will officially debut in Amsterdam next month and then begin rolling out across the rest of the German automaker’s line-up.