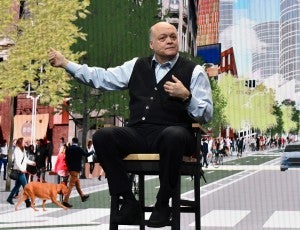 Ford has been attempting to fashion a spot atop the “mobility” mountain through acquisitions and innovation; however, the entire plan hasn’t been revealed — until now.

Ford CEO Paul Hackett attempted to lay out the vision of the company’s Transportation Mobility Cloud during the keynote of CES 2018 in Las Vegas with mixed results.

If one looks at the investor community, message not received as the automaker’s stock dropped slightly overnight. However, there are some industry observers who seemed to understand what he was talking about, although they are less excited about it than Hackett is.

“We’re just beginning to understand what the tech will allow. … I need you to be excited to work with us,” he said.

Hackett’s move to implore listeners for support for this idea is implicit because unlike an autonomous vehicle or long-range electric vehicle – neither of which is Ford at the forefront of developing at an industry-leading level – the automaker is looking developing the environment those vehicles thrive in. 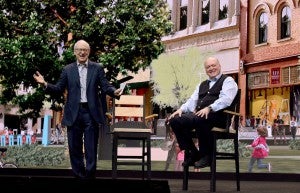 “That is why Ford is taking a user-centered, systems-level design approach to mobility,” Hackett said. “We need to step back and look broadly at how the overall transportation operating system can help us all lead better, more productive lives. It is not good enough to just implement this new technology without first fully understanding how it is going to make people’s lives better. We need to get this new design right.

“How do we do that? We have begun by collaborating with cities, civic organizations, urban planners, technologists and designers around the world to develop new ways of moving people and goods.

“The challenge is enormous. We are talking about orchestrating the entire transportation network that is already woven into the fabric of our urban environments and civic life. But it is a task we must undertake because the old system is failing.”

In short, he’s talking about creating the “City of Tomorrow” instead of creating it on the fly as much of the current civic infrastructure has been developed.

He’s talking about a land of no traffic jams, efficient flows of goods and services and where people have time to reconnect on a personal level that is more than a wave as kids get dropped off at practice and soccer mom zooms off on her next errand.

“Now is our opportunity to reclaim the streets for living — to take major leaps in the direction of building a true City of Tomorrow and re-imagine how our streets and cities function much more efficiently,” Hackett said.

(Click Here for more about Hackett taking on harassment at Ford’s plants in Chicago.)

All of this pie-in-the-sky idea is great on the surface, but Hackett was long on vision and short on specifics, according to some.

“Ford’s vision for the smart city is an interesting premise, but at this point it’s not much more than that,” Edmunds Analyst Jessica Caldwell told the Detroit News after the presentation. “It’s admirable that Ford is taking a philosophical approach and is looking at how connected vehicles can change society for the better — however, this future is a long way off. In the meantime, Ford has an opportunity to better articulate how they’re going to improve the lives of car shoppers today.”

However, Ford is not as far away as some may believe. Marcy Klevorn, Ford’s president of smart mobility, said a version of the Transportation Mobility Cloud is already in use by the automaker, managing its Chariot shuttle fleets in San Francisco and New York.

The company has also opened up all of this technology to app developers and other automakers in the hopes of expediting its development — and a plan to monetize it later. Klevorn said using a networked city could open up new avenues for businesses to grow.

However, ensuring the system is robust and functions flawlessly is where Ford comes in, along with tech partners, such as Qualcomm. They could develop a system for a city or region and then charge fees for gaining access to it.

(To see more about Hackett’s insistence on ‘no dumb cars’ in the future, Click Here.)

It sounds great, but investors determined they weren’t impressed: Ford’s stock fell 0.4% while the Dow was up slightly. Not a resounding rebuke of the idea, but it definitely means that Hackett and senior Ford executives have more work to do to generate widespread support for the concept.