Despite giving the Camry a stylish makeover the sedan continued to lose momentum last year.

If anyone still questions the way light trucks have come to dominate the U.S. automotive market you only need look at the 2017 sales charts to see how passenger cars are on virtual life support these days.

Perhaps the most significant development finds that the Toyota RAV4 last year outsold the Camry for the first time ever. And so did the Nissan Rogue.

The overall numbers for 2017 weren’t good, the U.S. market posting its first decline since the end of the Great Recession. And demand likely would have dipped more than the modest 5% if it weren’t for the strong, late-year surge as motorists in Florida and Texas raced to replace vehicles destroyed during the summer’s devastating hurricanes.

(New vehicle sales sputter in December. Click Here for a closer look at the month and yearly totals.)

A closer look reveals that passenger cars were down by 11 percent for the year. In fact, there were only a handful of sedan models that didn’t lose momentum during 2017. It’s no wonder that manufacturers are being forced to rethink their product portfolios. Fiat Chrysler no longer builds a single passenger car model in the U.S., converting plants in Illinois and Michigan to produce pickups and SUVs. 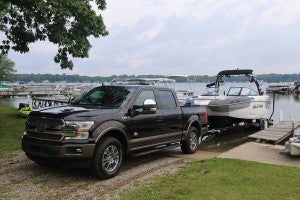 The latest version of the big Ford F-150 continued to overwhelm the competition.

Ford, which originally planned to move the compact Focus to a new plant in Mexico scrubbed that idea and is now consolidating production into a single facility in China. The automaker has also issued an advisory to North American suppliers that appears to indicate it’s scrapping plans for an all-new version that was due out in 2020. The Detroit carmaker won’t confirm those reports but says it will have an announcement on the future of the Fusion in a few months.

GM is reportedly also studying the fate of a range of sedan models, including the slow-selling Cadillac CT6 and big Chevrolet Impala. Toyota is bringing out a new Avalon at the upcoming Detroit Auto Show but some analysts are wagering it could be scrubbed if sales don’t pick up sharply over the next year or two.

The story is very different on the light truck side of the ledger. There were relatively few pickups and SUVs that didn’t gain ground or, at the least, that didn’t fare better than the overall U.S. market. Look at some products and you’d think the automotive revival was still going strong.

Take the Ford F-Series pickup. It finished 2017 with sales of 896,764, the nameplate’s fourth-best year ever, and it’s strongest showing since 2005, with a year-over-year gain of 9.3 percent. That positioned the full-size Ford pickup line as the number one-selling truck for the 41st year in a row and made it the country’s overall best-selling vehicle for the 36th consecutive year. (Ford’s various SUVs clocked collective sales of 766,302 in 2017, a 3% increase.)

The Chevrolet Silverado came in about 300,000 units short of its Ford rival, but still locked down second place in the overall U.S. charts, with the big Ram 1500 coming in third. 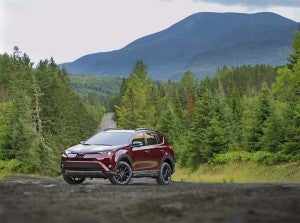 Toyota had been expecting the RAV4 to nudge the Camry aside last year.

That’s been the established order for years, but what happened next on the sales charts is where the big surprises can be found.

Seemingly forever, the Toyota Camry was the best-selling passenger car and the number-four seller overall in the U.S. market. But, as Toyota officials had been hinting for months, Camry was brushed aside by the increasingly popular RAV4. Where the sedan was down by 0.4% to 387,081, the SUV surged 15.7% — in an otherwise weak market — to 407,594.

“With the strength of the SUV market, it’s no surprise that RAV4 was not only our best-selling model, but the best-selling non-pickup truck in the industry,” Jack Hollis, group vice president and general manager, Toyota Division, said following the release of Toyota’s annual sales numbers.

Adding to Camry’s ignominious decline, it actually slipped into fifth place overall, behind the Nissan Rogue, which delivered a 22.3% sales gain, to 403,465.

Sedans have been losing momentum for years, but trucks, especially SUVs and crossover-utility vehicles, went into overdrive last year. And it’s anyone’s guess how much higher they can go. The real surge, now, is coming in the small and compact segments that collectively account for about a third of the U.S. market, Ford officials noted this week. The automaker hasn’t been a player in the subcompact ute segment but will soon add the Indian-made EcoSport to fill that gap. 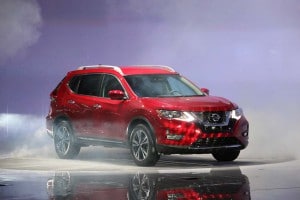 Manufacturers who don’t have a broad enough array of light trucks were among those to suffer most last year, Hyundai and Kia two of the hardest hit. Volkswagen, which had little to offer ute buyers until recently actually scored a good burst of momentum as 2017 came to a close thanks to the launch of its new three-row Atlas model and the addition of a larger Tiguan.

Luxury makers were particularly aggressive in filling in gaps in their ute line-ups. And that trend will continue. BMW has left little white space and is going to show its new X2 model at the North American International Auto Show later this month. Alfa Romeo has been generating buzz – and ringing up sales – with its first ute, the Stelvio. And it recently confirmed plans to launch a second, larger model. Even Ferrari late last year said it would add a utility vehicle, as will Rolls-Royce, Lamborghini and Aston Martin.

The auto industry has a history of operating in cycles, and what is popular with one generation often falls out of favor with the next. But so far, the youngest buyers in the market show little sign of going back to the sedans and coupes of yesteryear.

(Click Here to see how used car prices have taken a record slide.)