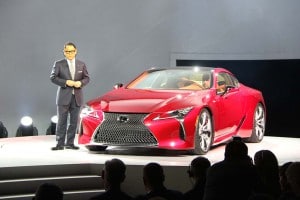 Toyota Pres. Akio Toyoda at the launch of the Lexus LC coupe - which is offered with a hybrid option.

Toyota Motor Co. President Akio Toyoda said Wednesday that he expects half of the company’s sales to come from electrified vehicles – including hybrids and plug-based models – by 2030.

Toyoda spoke during a news conference called to announce a partnership with Panasonic to develop new battery technology that would be used for future Toyota products. The emphasis on electrified vehicles underscores a major shift in strategy by Japan’s largest automaker which, until recently, focused on hybrids but steered clear of more advanced plug-in hybrids and pure battery-electric vehicles, or BEVs.

“The auto industry is now facing a major change of the kind that comes once in a hundred years,” said the 61-year-old grandson of Toyota’s founder.

The new emphasis on battery power is the latest in a series of directional shifts since Toyoda took the reins at Toyota in 2009. He has been putting an emphasis on more “passionate” products, including those with better performance and more striking design, than the company’s traditional, appliance-like models. And while Toyota has long been a leader in the hybrid field, primarily with its Prius model, Toyoda wants to add more advanced, battery-based products, as well. 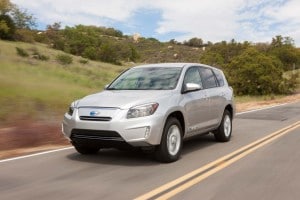 While Toyoda briefly has sold a few electrified models – most recently a version of the RAV4 crossover developed with the help of Tesla – it has generally shied away from vehicles using lithium-ion batteries in favor of less energy-dense nickel-metal hydride chemistry. That reflects a comfort with the reliability of NiMH batteries, as well as early problems Toyota had with lithium technology.

But the carmaker is watching its image as the cutting-edge leader in green technology largely evaporate as other carmakers stake their fortunes on new zero-emissions models. That includes not only all-electric Tesla but key rivals like General Motors and Volkswagen.

GM now offers both the plug-in Chevrolet Volt and the Chevy Bolt EV, along with numerous conventional hybrids. It plans to have “at least 20” pure BEV models by 2023, according to global product development chief Mark Reuss. Meanwhile, VW has targeted 50 BEVs for its various brands by 2025 and recently announced plans to spend $40 billion on the development of electrified and autonomous vehicles.

Toyota President Toyoda did not lay out specific plans for advanced battery models to come, though it earlier this year announced a partnership with Mazda that will see them share in the development and production of new BEV models at a new assembly plant to be built in the United States. It is expected to begin production in 2021.

To prepare for that launch, Toyota and Mazda have also formed a partnership with Japanese mega-supplier Denso called EV C.A. Spirit Co. Ltd. Toyota will provide 90% of the capital for the venture, which is aimed at development new electric vehicle technology.

The Japanese giant now will enter a separate alliance with Panasonic Corp., a company that is already one of the leaders in electric vehicle batteries. It is the primary partner and the largest funder for the Tesla Gigafactory in Reno, Nevada. And Panasonic already provides the batteries for Toyota’s existing electrified models.

What remains to be seen is what type of batteries the new partnership will produce. Toyota has given strong indication that when the U.S. battery-car project launches the new models to be produced there will rely on next-generation solid-state batteries. These are expected to be lighter, small, more energy dense and quicker to charge than today’s lithium-ion chemistry. And industry analysts believe they eventually will become significantly cheaper.

By comparison, Japan’s third-largest automaker, Honda, has forecast about two-thirds of its 2030 sales will come from electrified vehicles of various forms.