This year expected to be fourth-best sales result ever. 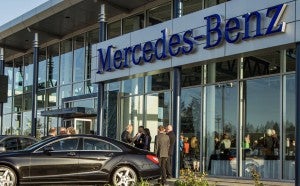 New vehicle sales in December are expected to decline 7%, according to analysts.

Despite dropping millions of dollars on advertising during the holidays, analysts estimate that sales of new vehicles in December 2017 will drop 7% year-over-year with virtually every major manufacturer seeing its sales drop.

However, manufacturers can take comfort from the fact that this December will be the best sales month of 2017. This year will end at 17.1 million units sold, which is a 2% drop from last year, but still the fourth-largest sales total in history.

“December should be the biggest sales month of the year, and despite our expectations for significant year-over-year declines, the projected SAAR of 17.6 million would be the third-highest of the year,” said Tim Fleming, analyst for Kelley Blue Book.

“It’s also important to remember that December 2016 was the strongest month in nearly 15 years, fueled by heavy incentives and year-end sales objectives,” he added.

(New vehicle sales off slightly in November. Click Here for the story.)

“We’re still expecting a year-end sales push from many manufacturers, which will translate into incentives and discounting, but since the sales objectives should be reduced from last year’s peak, we are projecting slower sales than last December.”

Kelley Blue Book estimated all major automakers will report negative sales growth for the month; however, Ford Motor Co. could report one of the better months, gaining nearly a percentage point in market share on the strength of its new Ford Expedition and Lincoln Navigator.

(Click Here for more about flat auto sales in October.)

Subaru, which has a long string of monthly sales increases could sales drop for December by a small amount. On the other end of the spectrum, Fiat Chrysler, which is in the midst of several key launches, is poised to lose the most volume year-over-year.

At the segment level, full-size trucks should be the second-largest segment in the industry in December 2017 with market share climbing as high as 14%. New vehicle sales stalled last month even as demand for trucks remained very healthy during November.

(To see more about when to get the best deal on a new vehicle, Click Here.)

Both General Motors and Fiat Chrysler Automobiles N.V. reported a sales drop during November despite health sales of trucks and utility vehicles. Ford Motor Co. also had a strong month in November as it reported a sales increase of 6.2%.