Porsche Rolls Out Not One, But Four New Models 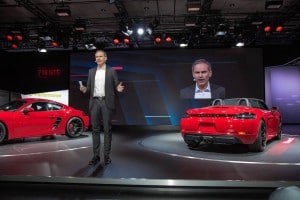 The influence of the California market has on the management of Porsche AG was clearly on display during the press days leading into the Los Angeles Auto Show as the German sports car maker unveiled not one but four new sports cars and the new Porsche Cayenne in the U.S. for the first time.

Oliver Blume, Porsche’s chief executive officer, noted that if California was an independent country, it would be Porsche’s fifth-largest market and Porsche has always paid attention to the preferences of enthusiasts in California who have been instrumental in shaping the Porsche product line throughout the company’s life.

“Our cars are built in Southern Germany but they always seem to look better here in Southern California,” Blume said.

The new models rolled on in Los Angeles this year included 718 GTS versions of the Porsche Cayman and Porsche Boxster. Both cars will come equipped with a 2.5-liter engine and six-speed transmission. The powertrains produce 365 horsepower and can go from zero to 60 in under four seconds. 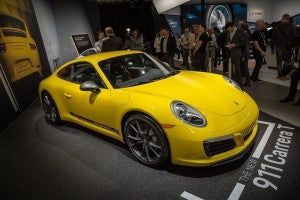 Porsche unveiled not one, but four new vehicles on the stage in Los Angeles.

The third of the four sports cars is the Panamera Turbo SE-hybrid, which Blume described as the most powerful sports sedan in world capable of producing 680 horsepower but also going 30 miles on electricity only when it is fully charged, Blume said.

California is not only known for its love of two-door sports cars but also for pioneering electric vehicles, Blume said.

The final sports car unveiled during the press days was the Porsche 911 Carrera T.

(Click Here to see more about the Gen-3 Cayenne.) 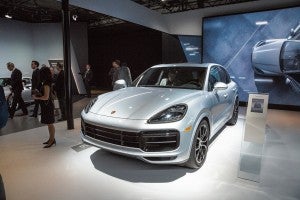 The Carrera T is meant to appeal to enthusiasts, who appreciate a two-door sports car that light weight and powerful, said Detlev von Platen. It also fits neatly in the911 between the 911 Carrera and the more technologically advanced 911 Carrera S.

In addition to the cars, the Germans took the bow off the new, third generation Porsche Cayenne, which has the heart of a sports car even though it is shaped like a utility vehicle.

Overall Porsche’s global sales have grown by 4% this year and are expected to top 206,000 units worldwide, including more than 52,000 units in the U.S., von Platen said.