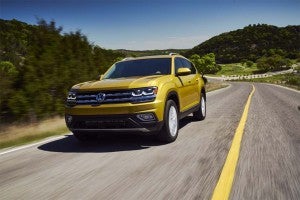 Volkswagen's new Atlas was driving up sales by more than 11% for the automaker last month.

The popularity of trucks and utility vehicles continue to lift automakers’ sales during October in what was essentially a flat month for the industry.

“Strong customer demand for high series Super Duty continues, and now we’re seeing the same for the new 2018 F150. With sales up 15.9%, F-Series drove our overall truck sales to an 11.4% gain for the month.”

(New car sales expected to be strong in October. For the preview, Click Here.)

General Motors total sales were down 2%, reflecting lower passenger cars deliveries and one fewer selling day year over year and the impact of a month long-strike at a key assembly plant in Ingersoll, Ontario.

“We are heading into the fourth quarter with good momentum, thanks to a strong U.S. economy and very strong pickup and crossover sales,” said Kurt McNeil, U.S. vice president of Sales Operations.

“In fact, Chevrolet and GMC have some of the fastest-turning crossovers in the industry. The all-new Chevrolet Equinox is off to a great start and we could have sold even more if we had more available.”

Meanwhile, Fiat Chrysler Automobiles N.V. reported a 13% drop compared with sales in October 2016. The October sales numbers were in line with FCA’s strategy to reduce sales to the daily rental segment, which are down 43% compared with year-ago results. Fleet sales represented 15% of total FCA US October sales.

American Honda Motor Co. reported that sales of Honda and Acura vehicles increased slightly by 0.9%. With strong sales of passenger cars, Honda Division reported an increase of 1.2% while Acura Division sales were down slightly at 1.3% on sales of 12,698 vehicles.

Toyota also reported a modest sales increase of 1.1% for October.

“The first month of the final quarter of 2017 saw sustained strong sales for the industry, and we expect that momentum to continue through the last two months of the year,” said Jack Hollis, group vice president and general manager, Toyota division.

“The Toyota division had another best-ever (result) for the month of October in light trucks, led by our 10th consecutive monthly sales record for RAV4. And the all-new 2018 Camry, with October sales of over 26,000 units, continues to generate excitement in our dealer showrooms.”

Subaru, which has set a long string of sales records this year, continued to roll in October with 0.5% sales increase. It is the 71st month in row that Subaru has posted a sales increase.

“Our franchise continues to establish new sales records, despite the very competitive climate in the auto industry,” said Thomas Doll, president and COO, Subaru of America Inc. “These continuing records are the result of the dedication of our retailer network in delivering the best purchase and service experience possible to our customers.”

One of the biggest overall winners was Volkswagen as it continued to shift its product portfolio from passenger cars to utility vehicles. VW sales increased 11.9% in October.

Audi of America reported an October sales increase of 9.6%, as the Q7, new Q5, and the new-to-the U.S. A5 Sportback, drove consumer demand.

October was the 82nd straight record sales month for Audi of America. The previous October record was set last year with 17,721 deliveries. Audi has now sold 180,339 vehicles in the U.S. this year. Year-to-date, Audi sales have increased 6.1%.

“The shift away from passenger cars in favor of trucks and SUVs is impacting all facets of the auto market,” said Jessica Caldwell, executive director of industry analysis for Edmunds.

“Interest rates are rising and bigger vehicles have higher price tags, but so far car shoppers don’t seem to be shying away from putting more money down or having a higher monthly payment to drive the vehicle they want.”