Pilot for new service would debut by end of decade. 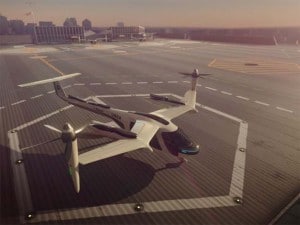 Uber wants to begin testing its flying cars for its Uber Elevate in Los Angeles in 2020.

When it comes to dealing with the city’s crowded streets, Los Angelenos have to hope that science fiction will soon become an everyday reality.

The recent release of the movie “Blade Runner 2049″ anticipates a day when the skies over L.A. are filled with flying cars. But if Uber has its way, that could happen a lot sooner. The nation’s ride-sharing giant wants to begin test flights of a prototype flying car in Los Angeles in 2020 and hopes to put it into commercial service by 2028.

“Technology will allow L.A. residents to literally fly over the city’s historically bad traffic, giving them time back to use in far more productive ways,” Uber Chief Technology Officer Jeff Holden said during a tech conference in Lisbon today. “At scale, we expect UberAir will perform tens of thousands of flights each day across the city.”

The concept of a flying car has been around for at least a century. In the 1920s, automotive pioneer Henry Ford experimented with a concept widely known as the “Flying Flivver,” a reference to the nickname for his original Model T. The project ended with the fatal crash of a prototype piloted by one of Ford’s close friends. 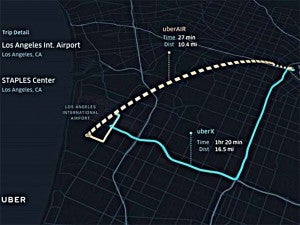 Uber envisions a day where "tens of thousands" of people will fly above ground traffic using Uber Air.

Several serious, but ultimately unsuccessful, attempts to create cars that can also fly have followed, and the concept is now being dusted off as new technologies become available that would make it easier to take to the air. That ranges from a Slovakian start-up which showed off its AeroMobil Flying Car earlier this year to Airbus, the big European aerospace firm that recently released an animation showing its own concept for a flying car/taxi service.

Uber began talking about its own concept, dubbed Uber Elevate, during another conference in Dallas last April, Holden then explaining that “Urban aviation is a natural next step for Uber. That’s why we’re working to make ‘Push a button, get a flight’ a reality.”

During that three-day event, Uber announced it was working with a number of different aerospace companies to develop pilot crafts. The one it is showing off in Lisbon this week looks somewhat like a cross between a small corporate airplane and the U.S. military’s Osprey, an aircraft whose engine and propellers can rotate to allow vertical takeover and then switch to a more conventional position for speedy forward propulsion. 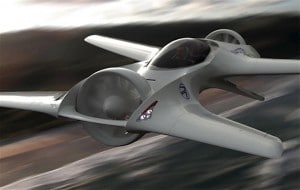 The DeLorean DR-7 is the latest entry into the flying car segment, or it will be when it arrives in late 2018.

Unlike today’s aircraft, Uber envisions its flying vehicles to run on battery power, rather than fossil fuels, a plus in a city struggling to control its endemic smog problems.

A video shown in Lisbon on Wednesday illustrated what it would be like to use, four passengers entering the craft as it prepares to take off from an “Uber Skyport” atop a skyscraper in downtown Los Angeles.

The target date of 2028 isn’t random, however. Uber says it wants to be airborne in time for the next Los Angeles Olympics that year.

In the Dallas conference last April, CTO Holden talked about also setting up programs in Dallas, Dubai and other cities around the world. In his statement this week he added that, “UberAir will be performing far more flights over cities on a daily basis than has ever been done before.” 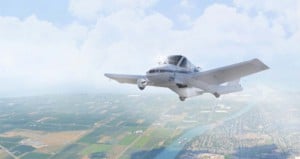 The project faces a number of challenges, the necessary technology being only one element that still needs to be proven out before Uber can take to the air. Like any other aircraft, what is now being referred to as Uber Air would need to win approval from federal aviation authorities as well as officials in L.A. and other cities where it might want to operate.

“Doing this safely and efficiently is going to require a foundational change in airspace management technologies,” Holden said.

Separately, Uber announced an agreement with Sandstone Properties, a real estate developer with 20 buildings in Los Angeles, to develop its Skyports. One would operate out of, or at least adjacent to, LAX, the city’s busy airport. Uber said that a flight would take about 27 minutes to downtown, an hour less than what is typical battling traffic. 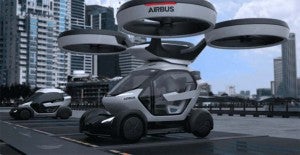 The Airbus Pop.Up concept shown here as it would separate from the vehicle's chassis.

The version of Uber Air revealed today is really a flying ride-sharing service. But other options are under consideration by Uber and potential competitors. Some envision craft that can operate on both the ground, like an automobile, and in the air. The Airbus concept relies on a passenger pod that can roam the streets by being attached to a drive unit. It then is mated to a drone-like assembly that takes to the air, leaving the wheeled portion behind. At its destination, the craft reverses the process. The advantage would be the ability to take a passenger from door to door in a single vehicle.

(To see more about the flying DeLorean, Click Here.)

While Uber may want to elevate passengers over L.A. traffic, Elon Musk has proposed the idea of taking them underneath the city’s crowded streets. The entrepreneur’s latest venture, The Boring Company, wants to dig a network of tunnels under Los Angeles that would allow high-speed traffic from one side of the city to another.