VoxelNet system could enhance a driverless vehicle’s view of the world.

Scientists at Apple Inc. have offered the first clear hint of the direction they may be taking with the long-rumored Apple Car.

A research paper published by online journal arXiv is particularly unusual because it seems to sidestep Apple’s traditionally fanatic desire to keep future products top secret until they’re ready to roll out onto the market.

Indeed, Apple has yet to fully confirm it is even interested in getting into the automotive business, though speculation centers around the company developing autonomous technology it will license out, rather than actually building its own vehicles.

The new research paper, authored by Yin Zhou and Oncel Tuzel, focuses on new software that it claims can make it significantly easier for an autonomous, or a fully driverless, vehicle to spot three-dimensional objects, such as a pedestrian or cyclist.

(Why is Apple checking out Fisker’s EMotion? Click Here to find out.) 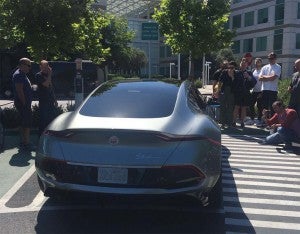 A Fisker EMotion was spotted at Apple HQ in Silicon Valley. Could the tech firm be interested in using the EV as a platform for its autonomous system?

The researchers say they have achieved “highly encouraging results” by using just LIDAR, a high-definition laser system, rather than having to rely on a mix of LIDAR, radar and machine vision.

So far, the “VoxelNet” system has only been tested through computer simulations, but if it proves viable in the real world it could substantially simplify the technology needed for a fully autonomous vehicle. Right now, most manufacturers expect they will need a so-called “sensor fusion” to fully identify what’s happening on the road around a self-driving vehicle.

(Why is Waymo teaming up with Avis and Apple with Hertz? Click Here to find out.)

Rumors of an Apple Car have been circulating for several years, the Wall Street Journal even reporting the program had been dubbed Project Titan, with the Silicon Valley tech giant hiring a number of talented engineers and managers from conventional automakers, as well as tech-oriented rivals like Tesla.

But more recent reports have also indicated Apple has sharply paired back the program, some well-placed observers believing the tech firm has decided not to produce cars of its own. Instead, some speculate, it may follow a similar route to that of Google spin-off Waymo, which has indicated its preference of licensing its autonomous technology to traditional automakers.

Apple CEO Tim Cook seemed to back that scenario when he suggested that autonomous vehicles are “the mother of all AI projects.”

Apple has also asked the federal government to take steps to make it easier to test autonomous technology. There it’s far from alone. With the strong backing of the auto industry and tech firms like Waymo, Congress is working up a bill that would make it simpler to test self-driving vehicles on public roads.

A number of states have so far enacted their own guidelines and Apple applied for a permit from the State of California in December 2016.

(To see more about Tim Cook admitting to a program, Click Here.)

Why Apple has decided to go public about VoxelNet is unclear, though it may be hoping to get feedback through the academic community that could help it speed up development. Waymo is already running more than 100 autonomous prototypes on public roads, including modified Chrysler Pacific Hybrid minivans being used for a pilot ride-sharing program in Phoenix. It plans to add hundreds more of the minivans as it starts testing fully driverless technology in the months ahead.