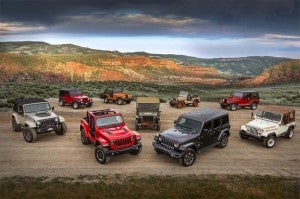 The 2018 Jeep Wrangler family shown alongside some classic Wrangler of the past.

It takes a second to realize that the Jeep Wrangler sitting on the stand at the Los Angeles Convention Center is new from the ground up. And that’s not by accident. When you’re redesigning an icon, Jeep officials explained, you have to respect tradition.

But don’t let looks fool you. A closer inspection reveals that the 2018 Jeep Wrangler isn’t just a light update. It really is a complete remake of the ultimate off-roader, a vehicle that traces its heritage back to the revolutionary off-roader that crisscrossed battle-scarred Europe and Asia during the dark days of World War II.

“Wrangler is instantaneously recognizable anywhere around the world,” said Michael Manley, the head of the Jeep brand, during a preview of the new ute ahead of its official debut at the Los Angeles Auto Show. The challenge, he said, was to make it even better, addressing the issues that even the most dedicated Wrangler loyalists hoped to improve.

“There were two main objectives,” said brand design chief Mark Allen, “to get a lot of heritage into the look of the vehicle and, secondly, to improve the experience.”

The Wrangler Rubicon will add an extra inch of ground clearance with the new JL line.

That started with an all-new platform intended to shave mass, the new model coming in about 200 pounds lighter than the outgoing Jeep Wrangler. Credit a number of creative steps, including the use of lightweight aluminum and composites for a number of body panels. By going to a resin compound, for example, the liftgate alone is now about 17 pounds lighter. That said, the Wrangler still uses steel on surfaces that might take abuse out in the field to reduce the risk of dings or dents – or worse.

Oh, and don’t worry about the new Jeep going soft. It’s still a body-on-frame platform. No cute-ute this. But the new model is a wee bit bigger, gaining about 1.4 inches in the two-door version’s wheelbase and 2.4 inches in length in the four-door. Overall length grows 1.5 and 2.5 inches, respectively. Even so, the turning radius is a foot shorter.

The ride height and ground clearance remain the same – except on the Wrangler Rubicon which adds another inch of clearance. 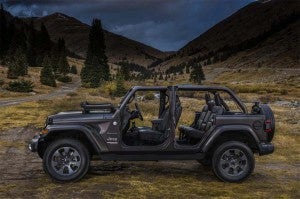 A new 2018 Wrangler Sahara shown with the doors and roof removed.

Even some seemingly classic Jeep design cues have been modernized. The round headlights actually contain new project bulbs, for one thing. The daytime running lights have been moved to the fenders. The familiar seven-slat grille on the new model – codenamed Jeep JL – has gone back to the shape of the classic Wrangler CJ. And the “Jeep” badge has been moved back onto the fenders, another classic cue, noted Mark Allen, the brand’s design director.

There have been nods to safety. There’s a lot more glass which solves the classic grumble about visibility. The spare tire has been slightly lowered to enhance the view through the rearview mirror and there’s now an ingeniously placed backup camera hidden within the spare tire’s mount.

They're still round but the headlights have changed, as has the grille and fenders.

In terms of power, Jeep will offer a range of engines – eventually, though the JL launches with just the old 3.6-liter Pentastar V-6 making 280 horsepower and 260 pound-feet of torque. But the engine now gets standard Stop-Start technology, another fuel-saving feature. Drivers will be offered the option of either a six-speed manual or eight-speed automatic. Mileage is  up, we’re promised, though EPA numbers have yet to be finalized.

Late on, we’ll get a 3.0-liter EcoDiesel V-6, at 240 hp and a whopping 420 lb-ft of torque. Look for it in 2019. A bit early, Wrangler buyers will get the option of a new 2.0-liter turbo making 269 hp and 295 lb-ft of torque. And here’s what may shake Jeep traditionalists to the core: the turbo package will be a mild hybrid using a new 48-volt system to further reduce fuel consumption.

As you might expect, Jeep buyers will have a range of options to choose, starting with different transfer cases, including one offering 4-High, 2-High, 4-Low and 2-Low on the Wrangler Sahara. 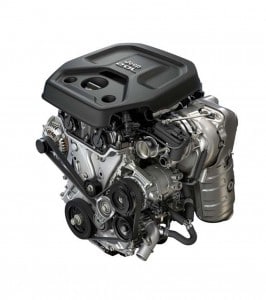 The Wrangler will eventually add a new 2-liter turbo-four -- its first hybrid powertrain.

Choice is one thing Jeep buyers crave. There are the engine and transfer case alternatives, two and four-door Wranglers, and a wide variety of body styles, from soft to hard and, of course, removable tops. There’s a trick rollback soft-top now, and depending on the model you’ll be able to remove windows, doors, top, even fold down the windshield. There are also some novel “donut” doors.

Look for other nods to modernity, including such niceties as 5,  7 and 8.4-inch touchscreens, a navigation package, Apple CarPlay and Android Auto and more safety features than ever.

But Jeep officials promise that nothing has been compromised with the Wrangler’s off-road capabilities. Nowhere is that more obvious than the Rubicon model which gets unique front and rear fascia and bumpers and trade mark tow hooks, front and back.

Jeep will be building the new Wrangler JL in its ancestral home in Toledo, Ohio, albeit in a plant that has been radically modernized for the new ute. Expect to see the 2018 model start a bit over $25,000, though you’ll be able to outfit one with all the bells and whistles you might want and push that price t more than double.

(What’s behind the latest big Jeep recall? Click Here for the story.)