Move poses another threat to Tesla.

Volkswagen will be competing with the likes of the Nikola One heavy-duty rig, which will be able to travel up to 1,200 miles on a tank of hydrogen.

Volkswagen plans to invest about $1.7 billion to develop a new range of high-tech trucks, much of that going into the development of battery-based vehicles, the maker said today.

VW becomes the latest on a growing list of manufacturers planning to develop electrified trucks, something that could pose yet another challenge to battery vehicle maker Tesla. The California-based company is developing an electric semi-truck, though it has again delayed the introduction of a prototype until next month due to problems with the launch of its new Model 3 battery-sedan.

The German company has already committed to spending about $20 billion on electrifying a broad range of its passenger car line-up, and it says it now sees tremendous opportunities on the truck side. Working with affiliate Navistar International, it hopes to introduce an electric medium-duty truck in North America by late 2019 or early 2020, according to VW Truck & Bus chief Andreas Renschler.

Automakers around the world have been tripping over one another in recent months as they announce plans to electrify their line-ups. Volvo, for one, says every vehicle it introduces from 2018 on will be equipped with either a hybrid, plug-in or pure battery-electric, or BEV, drivetrain.

(To see more about Tesla delaying the debut of its semi truck, Click Here.)

Last week, General Motors said it will have 20 BEVs on sale by 2023 and will go entirely electric at some unspecified date. 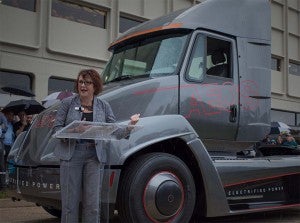 Tesla's not the only electric truck maker. Cummins unveiled its new urban electric concept aimed to take on Tesla.

These moves are driven by increasingly stringent government emissions and mileage standards around the world. Norway and India have gone so far as to mandate bans on internal combustion engines in passenger vehicles in the next decade, with Britain, France, Germany and China among other countries considering similar bans.

But pressure is ramping up on the truck industry, as well. And manufacturers are looking at a variety of low and zero-emissions alternatives. That includes not only electric but hydrogen-powered trucks, such as the heavy-duty semi unveiled by Salt Lake City start-up Nikola Motors late last year. Toyota, meanwhile, is testing its own fuel-cell-powered heavy truck, which it sees as a good alternative in smoggy environments such as shipping centers like the Ports of Long Beach and Los Angeles.

Tesla, meanwhile, has promised to introduce a fully electric semi, but it has now delayed the unveiling of its prototype twice, with the event now rescheduled for November. CEO Elon Musk indicated that the delay was forced by the company’s need to address a more immediate issue: the “production hell” it is facing with the ramp-up of production of its Model 3 battery-sedan.

(Click Here for more about about VW and Navistar’s electric truck coming in 2019.)

Tesla previously said it expects its Semi model will get more than 200 miles per charge. That’s a fraction of the distance current heavy-duty trucks can travel on a tank of diesel but, the company explained, it should be perfectly fine for shorter, regional runs, such as moving goods from a factory or port to a distribution center. 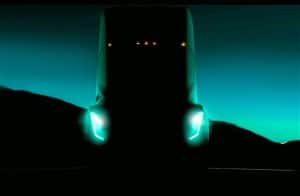 The reveal of tesla's new semi-truck has been pushed back a second time to Nov. 16.

The number of manufacturers pushing into electric trucks is rapidly increasing. Daimler already is field testing the small Fuso eCanter in Germany and Portugal and plans to bring it to the U.S. by 2019. The eCanter is a light-duty model aimed at urban delivery operations, with a range of 60 miles – and the ability to recharge in about an hour.

“We want Fuso to be the Tesla of electric trucks,” said the Japanese-based brand’s CEO Jecka Glasman. But Daimler is looking at battery options for a broad range of rigs built by all five of its truck brands, including heavy-duty manufacturer Freightliner.

There are also a number of start-ups targeting various sizes of electric trucks, such as Workhorse.

(Cummins rolls out its own battery-electric semi to compete with Tesla. For details, Click Here.)

For its part, VW already has electrified a small delivery truck that it last month started delivering to customers in New York. And it now will work on medium duty models in alliance with Navistar International Corp. The German company purchased a stake in Navistar last year.