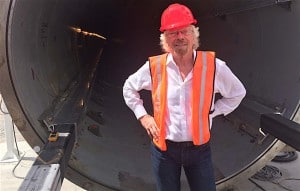 British billionaire Richard Branson already has taken aim at space with his Virgin Galactic rocket ship company. Now he wants to get travelers rocketing along closer to earth, the head of the Virgin Group joining the board of start-up Hyperloop One.

Branson is also buying an unspecified stake in that company – which aims to commercialize the high-speed transportation system envisioned by Tesla CEO Elon Musk – and it will now be renamed Virgin Hyperloop One. The goal is to send passenger and cargo pods shooting great distances through low-pressure tubes at speeds of more than 600 miles an hour.

“Virgin Hyperloop One will be all-electric and the team is working on ensuing it is a responsible and sustainable form of transport,” Branson’s firm said in a statement.

The tie-up is not entirely a surprise. Both of Hyperloop’s co-founders, executive chairman Shervin Pishevar and engineering chief Josh Giegel previously worked for Virgin Galactic, the company that is now completing tests before launching the first tourist program for wannabe space travelers.

(Musk shoots ahead with hyper loop test track. For the story, Click Here.)

As conceived by Musk, a hyperloop sends a pod racing through a tube in which most of the air has been evacuated, dramatically reducing aerodynamic drag. Instead of riding on rails, the pods will be elevated by magnetic levitation, similar to the Maglev trains now operating in China. But they will be able to reach more than twice the speed, a maximum of as much as 670 mph.

Hyperloop One has already demonstrated the concept, sending a pod blasting through a 500-meter tube in July. But it has visions of far greater distances. In fact, Musk has proposed that the State of California abandon the costly high-speed rail system it had planned to build near its coast, opting for a hyperloop, instead. 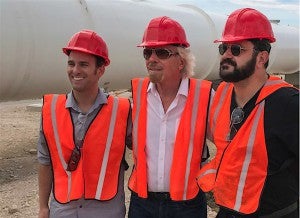 Hyperloop One co-founders Josh Giegel, left, and Sherwin Pishevar, right, were once in the employ of Richard Branson at Virgin Galactic.

The firm also said it is working on projects in a number of other countries, including Canada, India, Europe and the Middle East. And Musk made waves when, in July, he tweeted a claim that he had gotten “verbal govt approval” to build a hyperloop route from New York City to Washington, D.C. He claimed the system would cut travel time for the trip to just 29 minutes.

Neither the Virgin Group nor Hyperloop One are discussing the size of the latest investment, though the start-up transportation company last month raised $85 million in new funding. Since 2014, it has come up with $245 million in cash. It appears that Virgin’s investment was included in the latest funding round.

According to a report by the New York Times, Branson personally came up with the idea of investing in Hyperloop One after visiting the company’s Nevada test site earlier this year.

“Richard was excited by the concept,” Virgin Group communications chief Nick Fox told the paper, adding, “He’s always looking at the future of transportation, whether it be in space or land, and he’s run trains in the United Kingdom for more than 20 years.”

The Hyperloop concept has generated plenty of skepticism, as well as support, since Musk revealed the concept in 2013. He is not connected to Hyperloop One, one of several companies working on the concept.

It is unclear how Musk would be involved in such a project linking New York and Washington. And despite his claim of having gotten preliminary approval, a number of authorities who would likely have to give their okay have yet to heat from the billionaire investor. It does appear Musk would use another of his new ventures, the Boring Company tunneling firm, if the project got off – or more accurately, under – the ground.

For its part, Hyperloop One claims it is targeting 2021 for launching its first commercial operation, though it has not yet provided details on where it will be based.