New Report Details Impact of US Automakers on Economy 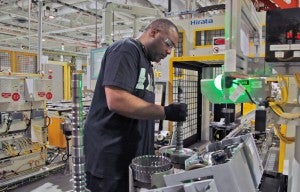 U.S. automakers pump more into the U.S. economy than their foreign competitors combined.

FCA US, Ford, and General Motors produce more of their vehicles, buy more of their parts, and conduct more of their R&D in the U.S. than their competitors, according to a new report from the American Automotive Policy Council Inc.

“As a result, they employ nearly two out of three of America’s autoworkers and operate three out of five of America’s auto assembly plants,” the report’s executive summary stated. “Automakers and their suppliers are America’s largest manufacturing sector, responsible for 3% of America’s GDP or gross domestic product.”

No other manufacturing sector generates as many American jobs, the report by the Washington, D.C. association that represents the common public policy interests of domestic carmakers added.

The report, released this week, also noted that FCA, Ford and General Motors each invest more in research and development than Hewlett-Packard, Facebook, Boeing and ExxonMobil. The three automakers invest more than $18 billion in R&D, combined, each year, according to the report, which was prepared for AAPC by the Center for Automotive Research in Ann Arbor, Michigan.

“To appreciate the scale and significance of auto R&D, consider several findings from CAR’s recent report, ‘Just How High-Tech is the Automotive Industry?’ For example: a new smart phone contains one microprocessor, while a new car or truck contains about 60,” the report said. 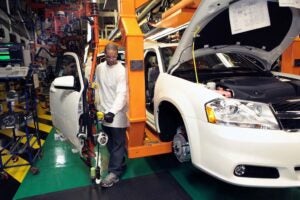 Fiat Chrysler along with GM and Ford contribute 3% of the nation's gross domestic product.

Overall, the auto sector ranks third out of the forty largest industries, on a global basis, in R&D spending.

In order to match the sales-weighted U.S. production rate of FCA US, Ford and GM last year, foreign automakers would have needed to assemble more than 2.2 million more vehicles here.

“To appreciate the scale of this difference in domestic content, consider what would happen if foreign automakers matched (domestic makers’) record. FCA US, Ford and GMs’ fleets contain 53% domestic content (on a sales-weighted basis),” the report said. 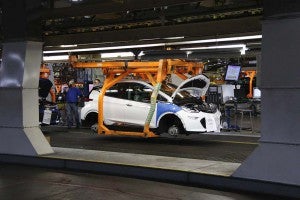 GM and its domestic rivals are one of the big drivers of the U.S. economy, according to a new report.

Domestic carmakers are also America’s largest exporters. During the past five years, automakers have exported more than $690 billion in vehicles and parts – approximately $76 billion more than the next largest exporter – the U.S. aerospace industry.