GM Talking With US Army about Developing New Fuel-Cell Vehicle 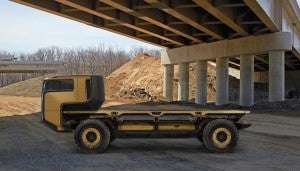 SURUS was designed to form a foundation for a family of commercial vehicle solutions that leverages a single propulsion system integrated into a common chassis.

The Army has been testing the fuel cell-powered Chevrolet Colorado ZH2 on U.S. bases for the past six months to determine the viability of hydrogen-powered vehicles in military-mission tactical environments.

Now the two sides are in talks to add the SURUS to that evaluation program. The SURUS is flexible fuel cell-powered, four-wheel concept with autonomous capabilities. It is based on a heavy-duty truck frame and designed as a “foundation” for a new generation of commercial vehicles that leverages a single propulsion system integrated into a common chassis, according to GM officials.

The automaker said Friday that the discussions with the Army Tank Automotive Research, Development and Engineering Center about the SURUS could be “a next step of the broader collaboration to evaluate fuel cell technology for future military applications.” 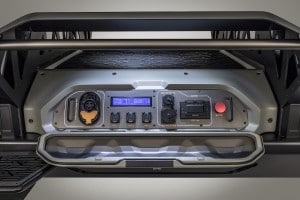 The Exportable Power Takeoff (EPTO) feature demonstrates how high-voltage DC from the fuel cell stack could be converted to both high- and low-voltage AC to power tools or equipment.

The platform will be on display at the fall meeting of the Association of the U.S. Army next week in Washington, D.C. It can be configured for a wide-array of applications.

Outside military solutions, GM is evaluating SURUS for a wide-range of applications such as freight; mobile and emergency backup power generation; light- and medium-duty trucks; and emergency rescue vehicles such as ambulances and others used in disaster-relief efforts, helping reduce human exposure to harm.

In the meantime, the Army has been testing the Colorado in off-road conditions, evaluating power generation, reduced odor, acoustic and thermal signatures, high wheel torque, extended operating range and potential use of the byproduct water: all vital controllables for future military vehicles.

Military testing has shown the ZH2 reduced acoustic nondetection distance by 90% compared with current military vehicles in operation, according to GM. This means the ZH2 can get 10 times closer before being detected, the company notes.

(To see more about GM partnering with Honda on fuel-cell development, Click Here.)