Nothing to be embarrassed about here. 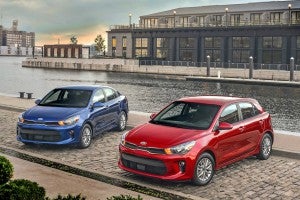 Kia's latest generation of the Rio reveals how far the automaker's come since arriving in the U.S. more than two decades ago.

We all have stages of life that we regret. Usually, most of us face up to that at a high school reunion, when embarrassing stories reappear to remind us of how far we’ve come. It’s no different for automakers. Some won’t admit those little embarrassments, but others will.

“We’re very honest about our past,” said James Bell, director of communications for Kia Motors America. “This company recognizes that at one point, a little less of a reputation was something that was deserved. But we’re moving past that.”

Looking at the smaller of the Korean carmakers in 1995, it’s hard to imagine that the Kia of 2017 is the same company. When Kia first started selling the Rio, it could charitably be termed the worst car for sale in the United States. Yes, Rios came cheap, but there was a reason for it. 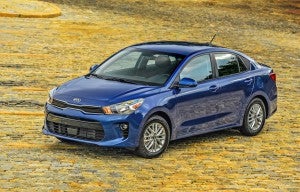 The new Rio sedan gets an updated look for 2018 with sharper lines and European feel for the exterior.

Today, the brand ranks highest in in J.D. Power’s Initial Quality Survey for the second consecutive year with a score of 72 problems per 100 vehicles – a number that Lexus would kill to achieve – and five Kia products won their segments in the latest IQS.

Elsewhere, the car that changed consumer perception of the brand, the Kia Soul, has earned its first ever Car & Driver 10 best award. Meanwhile, the brand’s product cadence has filled showrooms with an impressive array of products, including the full-size Cadenza, sporty turbocharged Soul, the all-new Niro and the product that has enthusiasts eagerly anticipating its arrival: the rear-wheel-drive Stinger sports sedan.

But if any car proves how far Kia has come, it’s the fourth-generation Rio. Offered as a four-door sedan and five-door hatchback, it’s the brand’s best seller with more than 400,000 units worldwide and it tops the charts in Europe as well.

This is why this subcompact Kia’s significance to company fortunes looms large, which may account for the car’s cautious styling, which boasts a European presence – especially on the five-door hatchback. The new model boasts a more geometric, chiseled appearance and a longer hood capped by a new version of Kia’s trademark tiger nose grille.

Most importantly, the windshield is more upright and, when combined with a low profile center console, makes the cabin feel roomier than the outgoing model. The more expansive feel is enhanced by the instrument panel’s horizontal design theme. 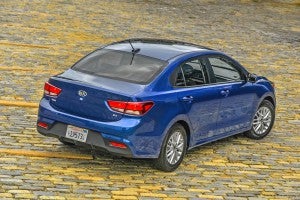 The new Rio gets a roomy truck and with the rear seats folded down 13.7 cubic feet of cargo space.

The good impressions continue upon closer inspection. Switchgear lacks the cheap feel of previous Rios, while the bad seams and poorly finished pieces you’d expect to find are absent. Knobs are nicely detailed with metallic inlays and rubberized edging and are blessedly simple to use. The only negative are the hard plastic door panels that lack padded armrests, which make for a noticeably uncomfortable experience. Considering its price point, however, material quality is impressive.

Clearly, its design is nothing to be embarrassed about, which is more than most of us can say about our high school yearbook photos. And the good impressions continue once underway.

Moving the front-wheel-drive Rio is Kia’s 1.6-liter four-cylinder engine that’s also used in the Kia Soul. It’s mated to a six-speed automatic or manual transmission – the latter only available on the base LX. Producing 130 horsepower and 119 pound-feet of torque, the Rio is more than capable. Given its size, you’d expect the engine to get vocal when pressed, but it remains remarkably muted. In fact, the car is so lacking in road and tire noise, you’ll wonder if you’re in a Rio.

Best of all, there’s a lot more driving fun than you’d expect in an entry-level scooter, especially considering its front struts, rear torsion beam setup. Its progressive and predictable in its behavior, so much so, you might wonder when the hot hatch variant will arrive, something you would never say of a Kia Rio in past form.

It lacks the expected Korean floatiness and excessive brake dive, even at extremes. Take a corner too fast, brake hard and crank the wheel and the Rio will scrub off speed while maintaining way more grip than you’d come to expect. Credit the car’s rigid structure; the suspension pieces themselves are nothing special. 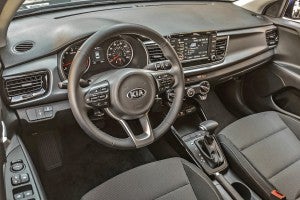 With just a few exceptions, the interior of the new Kia Rio gets plenty of materials upgrades as well as functional improvements.

The seats afford good legroom in the front, while space in the rear depends on the kindness of front seat passengers. The rear seats fold down to expand cargo space. On the four-door sedan, that’s 13.7 cubic feet; on the five-door, it’s 17.8 cubic feet, but expands to as much as 32.8 cubic feet with the seats folded.

Offered in LX, S and EX trims, there will also be a Launch Edition with red interior trim on seats, instrument panel, and door panels. Kia expects buyers to split 30% each on the first three trim levels, with the remaining opting for the Launch Edition.

Be advised however, that the LX is the perfect car for those who feel new cars have too many frills on them, or who want to lead a life of penance. While it still has a manual driver’s seat height adjuster, a radio and Apple CarPlay/Android Auto, it lacks power locks, mirrors or windows, Bluetooth and a remote entry key fob. Its wheels look awful, mirrors and door handles are finished in cheap black plastic and its miserable interior door panels are from the Mexican market model.

Don’t look for an imbedded navigation system for any model. Given that just 3% of Rio buyers opted for one, it was dropped.

But regardless of model or content, you’ll find it easy to appreciate the Rio’s s impressively solid structure, quiet cabin, and reasonably amusing driving experience, especially considering its reasonable price.

And that’s nothing to be embarrassed about, even in a Kia Rio.

Larry Printz is an automotive journalist based in South Florida. He can be reached at TheDrivingPrintz@gmail.com.