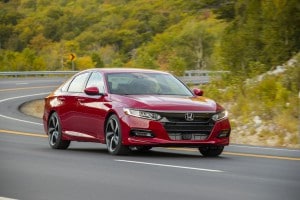 Honda's new 2018 Accord is designed to attract younger buyers, according to designers.

Someone at Honda is trying to send a message about the 2018 Honda Accord.

Why else would the automaker show the latest version of their bread-and-butter midsize sedan, at the hotel that played host to the Bretton Woods International Monetary Conference in 1944? It was at this remote resort nestled in the White Mountains where representatives from 44 countries hammered out the Bretton Woods Agreement, which created the International Monetary Fund and the World Bank – two institutions that are still with us. Notably, it also propped up the failing gold standard with much help from America, although even the U.S. abandoned it in 1971.

Yes, midsize car sales have fallen 2% for the first six months of 2017 even as SUV sales rose 10.8%, according to J.D. Power. But if you look closer, you’ll find the Accord is very much a sales powerhouse, outperforming every SUV in America except Honda’s own CR-V and the Toyota RAV4. In fact, it outsells the entire product line of 30 brands in the U.S. market. And if the Accord were itself a brand, it would rank 12th, just ahead of Dodge, Volkswagen and Mercedes-Benz. 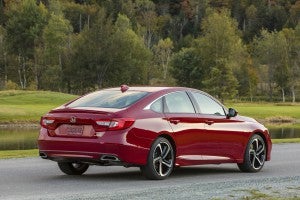 The new Accord features an exterior design that borrows from the smaller Civic.

(Honda investing big in future of Accord. To see more, Click Here.)

Measured another way, Honda officials claim that a new Accord has been sold every two minutes for 41 years.

“The death of the midsize car is greatly exaggerated,” said Jeff Conrad, senior vice president and general manager for automobiles at American Honda Motor Co. “Midsize sedan sales will still top 2 million units this year. And midsize sedans are outpacing midsize SUVs this year by at least half a million units.”

But Rebecca Lindland, senior director and executive analyst at Kelley Blue Book, notes that the figures Honda officials talk about are a snapshot in time. Midsize sedans are still extremely popular, but acceptance is declining in the face of rising SUV sales. “They haven’t enjoyed the growth that crossovers have enjoyed,” she said.

In an effort to stem declining midsize cars sales, OEMs are trying to give their mundane midsizers more personality, offering up some extreme redesigns. In some cases, the reworking is modest, such as on the 2018 Hyundai Sonata. Others, such as the 2018 Toyota Camry, are more risky, yet it’s still the only car that, for now, outsells the Accord. 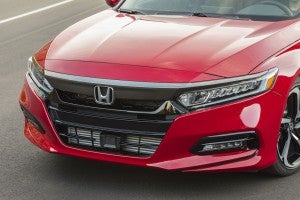 The new Accord features an aggressive design that is still familiar to long-time Honda owners.

Honda’s styling falls somewhere between these two extremes with a design that’s elegant yet sporty. Junji Yamano, chief engineer and global development leader for Honda R&D, said the aim was to “make a car that young people would choose.”

They’ve succeeded, as the car bears a family resemblance to the Civic without mimicking it on a larger scale. The Accord is a bit more refined in its styling, while still having an aggressive look. While it looks longer than the 2017 model, the new sedan actually is 0.59 inch lower, 0.39 inch wider – and 0.39 shorter than the car it replaces. However, the wheelbase has been lengthened by 2.16 inches, which pays dividends inside. Passenger volume increases by 2.5 cubic feet to 105.7, while cargo space grows nearly one cubic foot to 16.7 cubic feet.

To endow the car with a classically Honda sedan feel, designers lowered the front seats. Thoughtfully, they did what few mainstream automakers do by adding padding to the side of the center console where your leg rests against it. In the back seat, you’ll find leg room is far more generous than before, although the seat height seems a little low. All seats can be fitted with seat heaters, while front passengers get seat ventilators. On a sour note, the front passenger seat lacks a seat bottom tilt even on top trims, making it uncomfortable for longer trips.

Drivers face a horizontally themed instrument panel that endows the interior with an upscale feel. A large infotainment screen caps the center stack and its two large knobs – hallelujah – make it easy to operate, although Apple CarPlay didn’t work properly, a problem common to Hondas. Nevertheless, you can get an Accord with an embedded navigation system with traffic sign recognition, something not available at any price in a 2018 Toyota Camry. 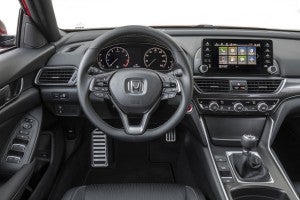 The interior of the 2018 Honda Accord features all of the latest technology that's easy to reach.

Like the rest of the car, the Accord’s engine lineup has been extensively revised, with a pair of turbocharged four-cylinder engines and a hybrid driveline replacing last year’s choice of a four-cylinder or V6 engine.

Lower trim Accords get the new turbocharged 1.5-liter four-cylinder engine with 192 horsepower and 192 pound-feet of torque paired to a continuously variable automatic transmission, although a six-speed manual transmission is available in Sport trim. If you need more power – and who doesn’t – there’s also a new turbocharged 2.0-liter four-cylinder engine lifted from the 2017 Civic Type R. It produces 252 horsepower and 273 pound-feet of torque. While it produces 23 horsepower less than last year’s V6, it generates an additional 21 pound-feet of torque. It’s married to a Honda-developed 10-speed automatic transmission, or a six-speed manual on Sport models. Come 2018, Honda will also offer a new Accord Hybrid.

As you’d expect, the 2.0-liter has plenty of power and the 10-speed delivers creamy, unobtrusive shifts. Like many other cars, there’s a choice of normal or sport driving modes. Notably, when accelerating from a dead stop in sport mode, the transmission keeps the engine at the top of rev range with each shift, a rarity given most automakers’ EPA-obsessed priorities. Engine roar remains impressively muted until it revs in sport mode. Otherwise you won’t hear anything, not even road noise. This library-quiet cabin, with its nicely finished details, makes the Accord feel above its station.

That feeling is enhanced by the suspension behavior, which remains flat in corners without a trade-off of a punishing ride. In fact, bump absorption is better than you’d expect given its athletic abilities. Drive it over train tracks and you’ll see; they’re almost unnoticeable. Sport mode never renders the ride punishing, while normal mode never becomes mushy. It’s a bravura performance for a mainstream sedan.

The 1.5-liter is down some on power compared to the 2.0-liter, but there’s more than enough for most buyers. Still you’ll be asking for power more often than you would with the 2.0-liter, and the engine is more vocal in all circumstances. The CVT is very well behaved, and can behave like a conventional transmission when shifted manually. Still, the CVT lacks some of the driving fun offered by the 2.0-liter’s 10-speed tranny.

Models with the 1.5-liter four-cylinder engine go on sale Oct. 18, with 2.0-liter models to follow in November. The Hybrid goes on sale early next year, and is still undergoing final tuning.

(Honda pulls wraps off all-new 2018 Accord. For the story, Click Here.)

It all add up to a top-to-bottom redesign of this midsize staple just in time for it to face an all-new Camry and a freshened Hyundai Sonata. Yet neither can compare to the 2018 Honda Accord which is not only best in class, it’s the gold standard among midsize sedans.

(Larry Printz is an automotive journalist based in South Florida. He can be reached at TheDrivingPrintz@gmail.com.)