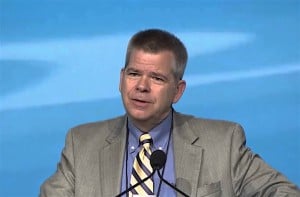 Chris Grundler, EPA director of air quality, is now in favor of easing CAFE rules to improve the working relationship with automakers.

With an eye on the environment, consumer pocket books and the United States’ reputation for innovation, several groups lined up to support the fuel-economy standards now in place and resist the Trump administration’s efforts to revise them.

Savings from lower gas spending along with lower cost estimates for fuel efficiency technologies require the Environmental Protection Agency to determine that its greenhouse gas standards for model years 2021–25 remain appropriate, according to comments submitted by Consumers Union, the policy and mobilization division of Consumer Reports, as the Environmental Protection Agency closed out the comment period

The dispute over the fuel-economy standards comes as major car makers, including General Motors, Ford, Toyota and Hyundai, are all pledging to increase dramatically the number of electric and hybrid vehicles on the road by 2025.

The comments, along with over 50,000 signatures the group collected in support of the standards, were submitted in response to EPA’s request for public input on its reconsideration of the final determination of greenhouse gas standards for vehicle model years 2021–25.

“Automakers are developing and deploying more and more new fuel saving technologies every day and consumers are saving money on gas and getting cleaner air as a result,” said Shannon Baker-Branstetter, senior policy counsel for Consumers Union.

Three environmental groups filed suit after the Trump administration attempted to delay an increase in penalties for failing to meet CAFE standards.

“This progress, along with the strong consumer demand demonstrated in our recent surveys, should make it easy for EPA to recognize the significant value to consumers and the economy from maintaining and even strengthening automotive efficiency and emissions standards out to 2025,” Branstetter said.

In addition, 36 institutional investors with more than $813 billion in assets and a network of major businesses with over $400 billion in revenue, also called on the Trump administration to not weaken the current light-duty vehicle fuel economy and greenhouse-gas emissions standards.

The comments from the investors belonging to the Ceres, an organization that encourages businesses to support environmentally friendly practices, were also part of ad blitz as well as letters to EPA.

The ads state that the network, which includes major businesses Autodesk, Ikea, Mars, Incorporated and Unilever, supports the standards because they spur innovation and advance the U.S. manufacturing sector, strengthen local economies and create jobs, and protect consumers and the U.S. auto industry from fuel price spikes.

Institutional investors, including New York City Comptroller Scott Stringer, wrote in a letter delivered today to Administrator Scott Pruitt, that the standards will “strengthen the U.S. economy, enhance the global competitiveness of the U.S. auto industry, provide the regulatory certainty needed to spur innovation, reduce both our dependence on oil and climate risk, save businesses and consumers money, and create jobs.”

(Automakers do about face on CAFE standards. Click Here for the story.)

“If we really want a strong economy, we must encourage American ingenuity and know-how, and build vehicles that can meet increasingly stringent international standards,” said David Richardson, executive director and global head of marketing and client service for Impax Investment Management, which manages approximately $9 billion in assets for institutional investors around the world.

“Rolling back the standards is inconsistent with international trends and would put the industry at a disadvantage. Stalling innovation is not a winning strategy — period,” he added.

An analysis by Ceres found that if the standards were weakened and gas prices spiked it could lead to 300,000 fewer vehicles sales for automakers and a loss of $1.08 billion in profits in 2025. Suppliers, which employ two and half times more jobs than automakers, would be hit especially hard, losing $3.3 billion a year between 2022–25 in sales of fuel efficient technologies.

“Weakening the rules would increase fuel costs for businesses and consumers, undermine the ability of the U.S. auto industry to compete internationally, and endanger good manufacturing jobs across the country,” Rawn said.

“The automakers can meet the current standards with known technologies at reasonable cost. They have no excuses,” said NRDC Clean Vehicles Director Luke Tonachel. “Rolling them back, however, would increase pollution, raise costs for drivers, slow innovation and put jobs at risk.”