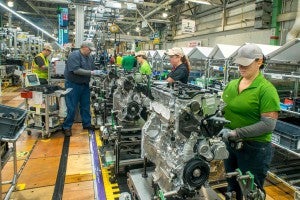 Toyota is ready to build its first hybrid, the Highlander hybrid, in the U.S. at its plant in Indiana.

Toyota, the world’s largest producer of gas-electric vehicles, plans to launch U.S. production of the hybrid version of its Highlander SUV at its Indiana assembly plant by 2020.

It will mark the first time a Toyota hybrid will be assembled in the U.S., though the Japanese manufacturer had previously considered building an American version of the Prius, the world’s most popular gas-electric model.

The announcement comes as Toyota gets ready to announce a broad electrification strategy that, among other things, will see it set up a new assembly plant in the U.S. to produce an all-new battery-electric vehicle. That project is part of a joint venture with Mazda, the smaller Japanese maker expected to sell its own versions of the new BEV.

“This investment is part of our long-term commitment to build more vehicles and components in the markets in which we sell them,” said Jim Lentz, CEO of Toyota Motor North America. “This strategy is designed to better serve our customers and dealers, and positions our manufacturing operations to fulfill their needs well into the future.”

The latest announcement covers a series of investments, collectively totaling $373.8 million, at an array of Toyota’s U.S. manufacturing plants. That includes not only the Indiana plant assembling the Highlander but facilities in West Virginia, Missouri, Kentucky and Tennessee that will produce components and assemble the hybrid 2.5-liter powertrain. 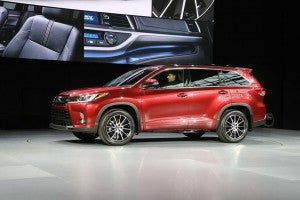 The 2017 Toyota Highlander makes its debut and will also be the automaker's first-ever U.S.-built hybrid.

A sixth plant, located in Huntsville, Alabama, will be upgraded to produce engines that can be used on a variety of different vehicles based off the company’s new Toyota New Generation Architecture. That platform is used for the latest-generation Prius and will serve as the underpinning for a wide range of other Toyota models going forward.

In terms of jobs, the impact will be modest, Toyota said, creating just 50 new positions at the Alabama plant. But the investment should “help to ensure the stability” of the workforce at the other plants, according to a company statement.

Toyota has, until now, been reluctant to move hybrid production out of Japan. It hasn’t helped that demand for gas-electric models like the Prius has declined over the last couple years, driven downward, in part, due to the collapse of global oil prices. But overall demand for electrified vehicles has been increasing in recent months, and the numbers are expected to grow more rapidly in the coming years.

A key reason is that emissions and mileage mandates are becoming more stringent. Even if the Trump Administration, as it has signaled, rolls back the 54.5 mpg Corporate Average Fuel Economy standard phasing in between now and 2025, few expect the trend to reverse. Among other things, a large portion of the U.S. is now covered by the even stricter Zero-Emissions Vehicle, or ZEV, mandate, enacted by California.

Meanwhile, most key markets abroad are, if anything, planning even tougher mandates. Several countries have already announced plans to phase out the internal combustion engine entirely, while others, including Britain, France, Germany and China, have signaled their intent to go with similar rules.

Toyota has only just gotten serious about advanced battery power with the Prius Prime.

That has led a growing number of manufacturers to announce broad electrification plans. Volvo, for example, will offer only hybrids, plug-ins and pure BEV models on all new vehicles launched after 2018. BMW, Volkswagen, Mercedes-Benz and others now plan to offer some form of electrified drive option for all future models.

Though a pioneer in the use of battery power, Toyota has been reluctant to go much beyond conventional hybrids. It recently launched a plug-in version of the Prius, however, and this summer announced the joint venture with Mazda to produce pure electric models.

The hybrid investment announced this week is expected to support that plan, though it will require significantly larger investments to come over the next decade, sources said.