Press a button for a “French Kiss.” 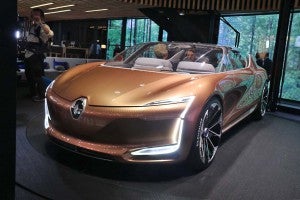 Renault's Symbioz Concept made its debut at the Frankfurt Motor Show and reflects how we might live our lives in the future.

For many folks, the automobile has become a second home. So why not make the car quite literally part of one’s house?

What happens when automakers begin delivering their first driverless, connected and battery-powered vehicles in the coming decade? Such vehicles are expected to dramatically change not only the way we travel but many aspects of the way we live our lives more broadly – or so says Renault, which is giving a glimpse of how this might happen with the debut of its Symbioz concept car at this week’s Frankfurt Motor Show.

As the name implies, embraces symbiosis, the concept of living together in harmony. In this case, it is envisioned as “an integrated house and car.” And, no, Renault isn’t suggesting you sell your home and live out of the backseat of the Symbioz, but it actually could operate as an additional room for your existing house, and even provide back-up power in the event of a grid outage.

What seems clear is that tomorrow’s cars will bring significant change. They’re expected to be digitally connected to the outside world. Autonomous and fully driverless capabilities will become commonplace, if not ubiquitous — as will battery-based drivetrain technology. 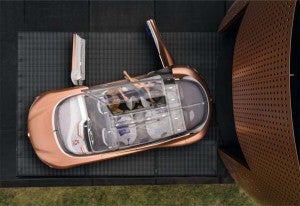 Renault's Symbioz interior is designed to accommodate the changing needs of families in the future.

Automakers are already beginning to explore how that will impact the very design of the vehicle. Fully electric models are already adapting skateboard-like platforms that mount their batteries, motors and other key drivetrain components below the floor. That will free up space normally devoted to the internal combustion system in use in today’s cars.

Taking away the steering wheel and other conventional controls could take things a step further, transforming the cabin into more of a living room than with traditional vehicles. Seats can be designed to swivel, for example, so those in the front and back can face one another. Tables could fold out or pop up, according to industry designers.

Those are some of the ideas the Renault Symbioz concept aims to explore.

“Already a car is more than just a way to get from one place to another. Full of technology, it’s becoming an interactive and personalized space that connects passengers to other cars, people and objects around them,” said Renault VP Thierry Bollore, during the concept vehicles Frankfurt preview. “Looking to 2030 we imagine new scenarios with more efficient energy use, connectivity and autonomous driving scenarios that will improve how we live and travel.” 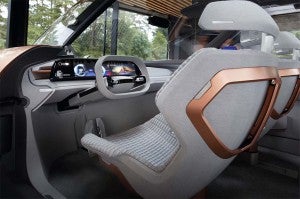 Just 15 feet long, the Symbioz packs a lot of technology and functionality into a smaller space.

Measuring barely 15 feet, nose-to-tail, it nonetheless features a near full-size interior. With its swiveling seats, large video displays and the ability to tap into an owner’s videos, music and other cloud-based data, the Symbioz is intended to be just as connected as home, office or smartphone.

Visually, Symbioz picks up themes of other recent Renault concepts, such as the Trezor. It makes heavy use of lightweight materials such as carbon fiber, though the upper half is largely glass, providing a near panoramic view of the car’s surroundings.

While many owners might want to make a car like Symbioz part of their home, it does have the capability of operating driverlessly, the concept version motivated by twin motors, one for each rear wheel. Renault claims they make a combined 661 horsepower and 487 pound-feet of torque.

Power for the concept vehicle comes from a 72 kilowatt-hour lithium-ion battery that can get up to an 80% recharge in 20 minutes using a Level 3 charger. The French automaker points out that specs could change dramatically over the next few years. That is likely to include the battery. A number of manufacturers and suppliers are working on next-gen solid state – or lithium-air – batteries that would sharply increase power density while lowering weight and making a pack much more compact. Toyota is broadly hinting it expects to have the new technology in production by 2021. 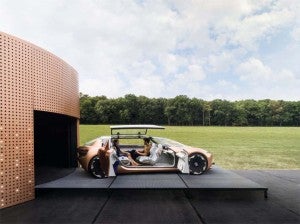 The Renault Symbioz offers up multiple layouts, including this "French Kiss" version.

With the current pack, Renault is targeting a range of 310 miles per charge – though the Symbioz would also connect to the household electric circuit, letting it reverse the flow of energy in the event of a blackout to keep the house powered up.

One of the more intriguing features of the Symbioz is that it has three driving modes, and each “alters the interior accordingly,” the carmaker says.

“Classic mode mirrors the set-up of current cars, Dynamic mode transforms the driving characteristics and seat for a more hot hatch-like experience, while AD mode activates full autonomy – the steering wheel and pedals retract so the driver can do other things. In AD mode, three interior layouts – named Alone@home, Relax and French Kiss – change the positions of the seats for relaxation, interaction with other passengers or other non-driving activities.”

While we’re not likely to see the Symbioz go into production, Renault says the concept reflects its “mid-term vision,” and suggests something building upon its themes could make it to market by the middle of the coming decade.