Maker plans to play up Leaf's performance, not its green impact. 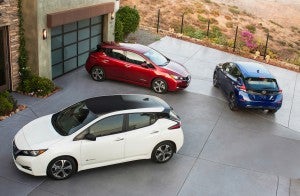 Nissan's 2018 Leaf EV is expected to see a bump in sales as interest in electric vehicles is on the rise.

(This story has been updated to reflect the coming addition of an optional, longer-range battery and higher-performance powertrain for the Leaf.)

The rising interest in electric vehicles as well as well as the availability of competitive models will ultimately help Nissan sell EVs in the U.S. once the 2018 Leaf goes on sale across the country early next month, company officials predicted as they took the wraps off the Leaf during an event in Las Vegas.

Brian Mangano, director of EV marketing and sales strategy, noted during an interview that there is greater awareness of electric vehicles now than there was back in 2010 when the first-generation Leaf made its debut. “It’s the awareness that comes with more entrants into the market. It validates EVs as a viable mobility option. Those things help us along,” he said.

“Plus, we’ve just learned a lot. We’ve expanded into new markets. We’ve been available in all 50 states for a long time, but we’ve expanded our marketing efforts in places like Vermont,” said Mangano, who noted the since its launch in 2010, Leaf has been the most affordable mass production EV in the world.

At the same time, the charging infrastructure needed to recharge the batteries of an EV has steadily expanded, particularly in the key markets. “Our buyers are very astute buyers. What they’re looking for is the right packaging,” he said. 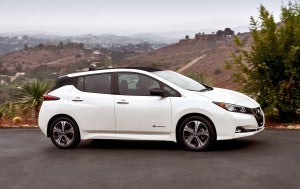 Nissan plans to play up the Leaf's performance capabilities, which are improved over the first-generation model.

Nissan is counting on a big bump in range to help win over buyers for what has been the world’s best-selling battery-electric vehicle since its 2010 introduction. But one question is whether the company has gone far enough, boosting the distance between charges to 150 miles. That is well short of the 238-mile range offered by the Chevrolet Bolt EV. And Tesla plans to offer an optional battery pack that will go up to arrange 300 miles for its new Model 3.

TheDetroitBureau.com was advised by Japanese company sources that Nissan will also add a longer-range battery expected to deliver at least 225 miles per charge. It should be on the option list sometime next year, and will clearly give Nissan an even bigger selling proposition.

Nissan also plans to stress that the new Leaf is fun to drive rather than emphasizing the car’s green credentials as a zero-emission vehicle, which helped lift the reputation of the first-gen Leaf. At the same time, Nissan will also emphasize the affordability of the new Leaf. The company has lowered the starting price to $29,990, while adding more content to make it a better value, Nissan officials said.

The new Leaf has 37% more horsepower and 20% torque, which comes from the 33% greater energy density of the battery. The new Leaf range of 150 miles is about 40% greater than the 2017 model. The options to be added next year are also expected to deliver an even bigger bump in performance, TheDetroitBureau.com was told. 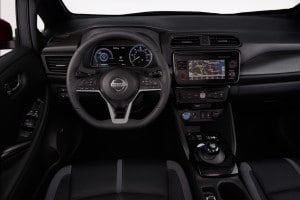 In addition, the Leaf also features an e-Pedal that alters the driving experience by letting drivers start, accelerate, decelerate and stop by increasing or decreasing the pressure applied to the accelerator. If the accelerator is released, regenerative and friction brakes are applied automatically, bringing the Leaf to a complete stop. The car holds its position, even on steep uphill slopes, until the accelerator is pressed again.

The reactiveness of e-Pedal helps enhance the pleasure of driving the Leaf.

During a press conference in Yokohama, senior Nissan executives also emphasized that the 2018 Leaf will serve as the leading edge of Nissan’s quest to lead the industry in bringing in introducing new technology.

(Nissan offers tease of all-new ’18 Leaf EV. Click Here to check it out.)

“The new Nissan Leaf, with its improved autonomy range, combined with the evolution of autonomous drive technology, such as ProPilot Assist and the simple operation of the e-Pedal, strengthens Nissan’s EV leadership, as well as the expansion of EVs globally. It also has the core competency of future Nissan models,” he said.