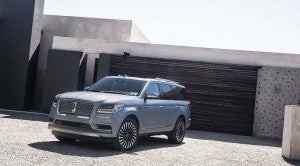 The new Navigator is expected to get a hybrid drive system it will share with the Ford F-150.

Lincoln is looking at the possibility of joining an expanding list of automotive brands that will offer some form of electrification on all of their vehicles.

With tough new emissions and mileages standards going into effect in all of the world’s major markets, automakers are struggling to find ways to improve the efficiency of their vehicles, and that’s expected to lead to more and more hybrids, plug-ins and pure battery-electric vehicles over the coming decade. Volvo and Jaguar Land Rover, two high-line brands once owned by Ford have said they are preparing to offer some form of battery-based drive on all models, whether as standard as optional fair, and others are moving in that direction.

Among them: Ford’s only remaining luxury brand, Lincoln. A report by the Reuters news service Thursday indicated the once-powerful marque will also offer some form of battery power on 100% of its models by 2022, though two sources have told TheDetroitBureau.com that this strategy has not yet been locked in place.

“It’s evolving,” said one well-placed Ford insider, speaking on background. “We’re looking at it, but will we go 100 percent electric across the (Lincoln) line-up? I don’t know yet.”

That was backed up by a second source who said Ford is “leaning” in that direction for Lincoln. But he noted that Jim Hackett, the former Steelcase chief executive who replaced ousted Ford CEO Mark Fields in May, is just wrapping up an extensive, 100-day review meant to examine all of Ford’s plans and strategies. Those include the second-largest Detroit automaker’s moves into autonomous vehicles, ride-sharing and electrification. 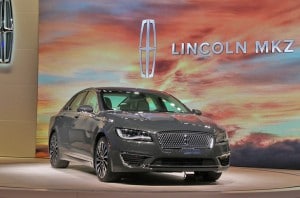 The latest version of the Lincoln MKZ already offers a conventional hybrid option.

If anything, Ford is expected to move ahead with, and likely expand upon the $4.5 billion electrification program it announced in January 2016. At that time, former Ford CEO Fields said a sizable portion of the carmaker’s U.S. fleet would be electrified, with hybrid versions in the works for vehicles as diverse as the full-size F-150 pickup and the sporty Mustang. At least 13 vehicles were set to get hybrid options, while more advanced plug-in and BEV models were also expected to come to market. In all 18 models were to get some form of electrified drivetrain option.

Within the last month the company has also confirmed plans to launch a joint venture in China to produce electric vehicles for that market. Chinese regulators are pressing the industry to switch to zero-emissions vehicles in an effort to deal with that country’s endemic emissions problems.

The idea of offering electrified options for all Lincoln models appears to be motivated, at least in part, by Ford’s desire to grow the luxury brand in China. Once one of the two dominant, high-line marques in the U.S., Lincoln has lagged import rivals like BMW, Lexus and Mercedes-Benz since the late 1990s. But it has been gaining ground in the fast-growing Chinese market and, one source indicated, it may need to go electric if it wants to continue building momentum there.

(Click Here for a preview of the all-electric Mercedes-Benz EQ A Concept coming to the Frankfurt Motor Show.)

The midsize Lincoln MKZ is already sold with a hybrid option, Ford taking the unusual step of offering that drivetrain at the same price as the conventional, gas model. Hybrid versions of the compact MKC crossover and the big Navigator SUV are apparently also in development. The Lincoln Navigator would use a modified version of the gas-electric drivetrain being developed for the Ford F-150 pickup.

According to Reuters, some models will get more advanced plug-in hybrid systems, including a new Aviator utility vehicle, as well as the big Continental sedan. And it appears possible buyers may get the option of either a conventional or plug-in on some Lincoln products. 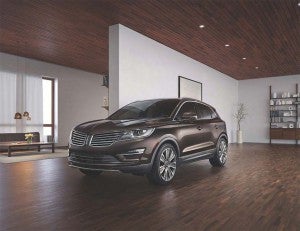 The Lincoln MKC may get a plug-in hybrid option.

What is unclear is if the Ford subsidiary will also add any pure BEV models. That is a path a number of its competitors are taking. Audi plans to launch an all-electric SUV next year, with other BEV models to follow. BMW said this week it will add 12 all-electric products by 2025. And Mercedes-Benz plans to offer at least 10 BEVs through its new EQ sub-brand.

If Lincoln does decide to offer electrified options on all of its models it could get a jump on some competitors, but it would actually just be the third manufacturer to go this route – fourth if you include all-BEV Tesla.

Volvo said it would offer some form of battery drive standard on all product lines introduced from 2018 on. That would mean either hybrid, plug-in or pure-electric, with some models offered with multiple battery options. The Swedish-based brand already offers its plug-in T8 “Twin Engine” package on numerous models, including the XC90 SUV.

Jaguar Land Rover this week said that it would make some form of electrification available as an option on all models starting in 2022, though buyers will continue to be offered more conventional, internal combustion engines for the foreseeable future.

(For more on JLR’s plans to go electric, Click Here.)

Automakers may have no choice but to ramp up their battery offerings over the next decade. Not only are emissions and mileage standards on the rise but a growing number of countries are planning to ban internal combustion engines entirely. Norway and India have already locked down such plans and the U.K., France and Germany are giving serious thought to similar measures, while China is already taking steps in that direction.