Not Buckling Up in Back? You’re Putting Everyone in Car at Risk

“The laws of physics aren’t suspended in the back seat.” 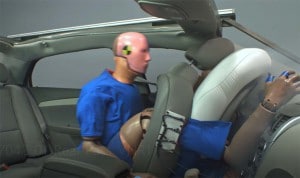 In a crash an unbelted back-seat occupant can fly around the vehicle, even out the windshield.

More than nine out of 10 Americans use their seatbelts when riding in the front of a car. But that number falls off sharply for rear seat passengers. And that could prove a deadly mistake.

In fact, those who don’t buckle up in back not only increase their own risk of being killed or seriously injured in a crash but also double the chance that those up front will be killed because they can turn into the equivalent of a human missile, warns the Insurance Institute for Highway Safety.

“The laws of physics aren’t suspended just because you’ve moved to the back seat,” said Jessica Jermakin, a senior IIHS researcher and author of a new study that found over 1,000 unrestrained back seat passengers were killed in crashes during 2015.

(As more kids die, new Senate HOT CARS bill aims to prevent children from being left behind. Click Here for the story.)

The study was, in part, triggered by the death of Bob Simon, the widely respected CBS news reporter killed in 2015, as well as the 1997 death of Princess Diana. Both were riding in the back of vehicles and neither wore their seatbelts. 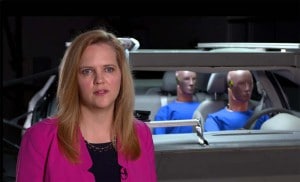 The IIHS asked Americans whether they buckle up in back and found that only 72% of 1,172 respondents said they did. Those aged 35 to 54 were lease likely to do so, the number coming in at only 66%. Among Millennials, those aged 18 to 34, 73% buckled up in back.

Most frequently, occupants say they don’t bother to buckle up on short trips, especially when riding in a cab or a ride-sharing vehicle. Only 54% of those using hired vehicles said they regular belted up in back.

People tend to think they are safe in the back of a vehicle, perhaps because they expect to be restrained by the seat in front. But a series of tests run by the IIHS revealed that in a crash, an occupant in the rear can fly forward between the front seats, even through the windshield. Alternatively, they can crash into the back of the front seat, doubling the chance that the driver or front-seat occupant is killed.

(Why are people getting sick, smelling fumes, in Ford Explorer? Click Here for more on NHTSA’s expanded probe.)

On the whole, someone sitting in back is eight times more likely to suffer a serious injury if they aren’t restrained, the IIHS reported. One reason is that back seat occupants generally don’t have the same level of safety technology protecting them – such as frontal airbags – that are working to keep those up front safe in the event of a collision. 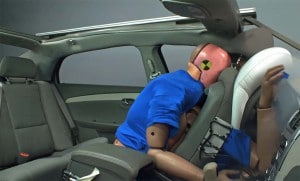 Front occupants are twice as likely to die in a crash if there's someone unbelted in back.

“It is still as safe to ride in the back seat as the front seat,” said Jermakin, “but not if you aren’t buckled up.”

While 49 states and the District of Columbia require front-seat occupants to buckle up, only 29 cover those in back. But studies have found rear-seat occupants would be more likely to do so if required by law. Those didn’t use belts also pointed to problems with the belts in back seats, claiming they were often uncomfortable or difficult to use.

The results of the new IIHS study echo the finding of a separate report by the Governors Highway Safety Association released last year. It found rear seat passengers were three times more likely to die in a crash if they went unbelted.

Safety belts, overall, are considered the most effective form of protection in a crash. They saved an estimated 13,941 lives in 2015, the latest year for which data are available. If everyone buckled up, safety experts and authorities contend, another 2,800 American highway deaths would have been prevented.