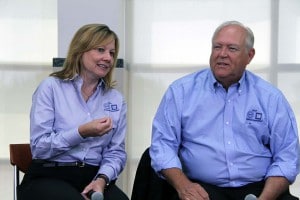 The United Auto Workers union is keeping an eye on General Motors Co, Ford Motor Co. and Fiat Chrysler Automobiles concerned about the potential threat to plants and jobs from slumping U.S. car sales and by increased imports from countries like China.

“We are talking to (GM) right now about the products that they currently have” at underused car plants such as Hamtramck in Michigan and Lordstown in Ohio, and whether they might be replaced with newer, more popular vehicles such as crossovers, UAW president Dennis Williams said.

“We are tracking it (and) we are addressing it,” said Williams noting he meets quarterly with GM Chairman and CEO Mary Barra. The discussion about replacement products is ongoing.

GM has cut shifts at several U.S. plants this year as inventories of unsold cars have ballooned. Industry analysts said more jobs could be at risk as the automaker wrestles with permanently shrinking production of small and midsized sedans.

(New car sales have peaked in the U.S., new study shows. Click Here for the story.)

Williams also warned that Detroit’s automakers would face a confrontation with the union if they elected to substitute a vehicle now built outside the U.S. for one that is built at a plant in the U.S.

“I do have a concern about the vehicles that are produced in China and South Korea. We have not abandoned that philosophy that you should build them where you see them. We’re on GM all the time about that,” he said.

(Click Here for details about how auto sales fell in June in the U.S.)

“I’m not happy with (Buick) Envision. If they want to build it in China they can sell it China,” he added.

Williams said he has meet with several officials from the Trump administration officials, starting with U.S. Secretary of Commerce Wilbur Ross, to discuss his concerns about the re-opening of discussions on the North American Free Trade Agreement which covers traded between Mexico and the U.S.

He noted that more than 70% of the cars built in Mexico are now exported to the U.S. Policies that boost the wages of Mexican workers have to be part of any proposal to alter the existing terms of the North American Free Trade agreement otherwise the discussions will be a waste of time.