Critical test for battery-carmaker set to get underway. 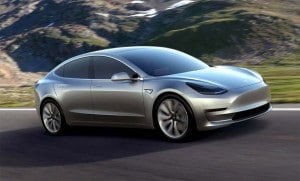 Tesla could hit its mark for the first time by rolling out the first saleable Model 3 this week.

The biggest test Tesla has ever faced is about to get underway, CEO Elon Musk announcing plans to roll the first saleable Model 3 off the line on Friday, the same day customers will be able to place official orders for the new battery-electric vehicle.

The Model 3 will be Tesla’s first entry into the mainstream electric market, with its $35,000 base price running roughly half that of the company’s current Models S and X offerings. Tesla has reported taking over 300,000 advanced registrations for the vehicle, each with $1,000 deposits, but one key question is how many of those will translate into actual orders.

The other question is how quickly Tesla will be able to meet demand. In a Sunday evening tweet, Musk said he expects that “Production grows grows exponentially, so Aug should be 100 cars and Sept above 1,500. Looks like we can reach 20,000 Model 3 cars per month in Dec.”

That’s in line with earlier comments by Musk that Tesla’s assembly plant in the San Francisco suburb of Fremont would reach production of around 5,000 of the new sedans weekly by the end of 2017. The goal is to double that “at some point in 2018.” 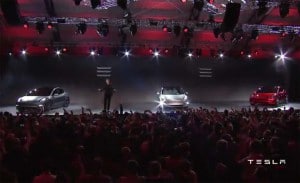 Those figures don’t include ongoing production of the Models S and X, which means that by the end of next year, Tesla is aiming to assemble more vehicles in two months than it built in all of 2016 – a total of just 84,000 of the larger sedan and the Model X SUV.

The fact that Tesla is simply getting the Model 3 underway this month is seen as something of a milestone and vindication. The carmaker had, until now, never met any of its prior, self-imposed production deadlines. It was roughly two years late with the Model X.

But Tesla has pulled out all stops to get the critical new offering rolling down the line on time, among other things briefly halting production of the older battery-cars earlier this year to refit the Fremont facility for Model 3.

Expectations for the new battery-sedan are extraordinarily high, as a successful launch could transform Tesla from a niche player into a mainstream automaker.

(Tesla autonomous vehicle chief leaves. Click Here for more on this latest in a series of high-profile defections.)

Tesla has not confirmed the exact number of advance registrations that have been put down since shortly after the Model 3 was unveiled on March 31, 2016. But some analysts estimate the figure is now close to 500,000. Tesla has cautioned buyers that if all those registrations translated into actual orders it would not be able to deliver all of the vehicles until late in 2018.

Tesla needs to avoid the problems it had with the Model X, especially the ute's Falcon Doors.

Analysts say the strong initial demand has been fostered by a variety of factors, not the least of which is the almost cult-like following Musk himself has developed.

The vehicle itself has earned positive, initial reviews for its styling, though it is unclear when Tesla will actually provide one of the vehicles to automotive media for test drives.

The company claims the battery-sedan will get about 215 miles per charge using the EPA test cycle. It also is expected to launch from 0 to 60 in the mid-5-second range.

That would be quicker than the Chevrolet Bolt EV, but less than the 238-mile range of the General Motors electric sedan — though observers believe Tesla may also offer longer-range Model 3 battery packs, as it does for the Models S and X.

Even with the launch of the Model 3 appearing to come on schedule, analysts and investors will be watching closely to see how well Tesla handles the production process. Early on, a majority of the Model X SUVs had to go through rework after rolling off the Fremont line. Tesla has repeatedly been criticized by influential Consumer Reports magazine for quality issues that, the non-profit magazine says, have yet to be fully resolved on the battery-SUV.

Meanwhile, Tesla is going to be facing far more competition in the near future. The Chevrolet Bolt beat the Model 3 to market by more than half a year. Soon, Nissan will update its seven-year-old Leaf EV to top 200 miles range. And more affordable, long-range offerings are coming from a variety of other manufacturers, including Toyota, Volkswagen and Ford. Luxury makers such as BMW, Audi and Mercedes-Benz will also target Tesla, Mercedes launching an entirely new sub-brand, dubbed EQ, that expects to have at least seven EVs on the market by the end of this decade.

(Why is Apple checking out Fisker’s new Emotion electric vehicle? Click Here for the answer.)