The Big Three automakers would like NAFTA to remain status quo; however, the Trump Administration is renegotiating the deal this summer.

With discussions on altering the North American Free Trade Agreement set to begin next month, Mexico’s auto exports set a record in June with the help of in shipments to buyers in the United States, according to new figures released by the Mexican Auto Industry Association.

With carmakers slowing production at plants in the U.S., these new results are certain to give new life to the Trump administration’s efforts to alter NAFTA’s terms.

Automakers generally fear that these potential changes have the potential to disrupt the international network of suppliers that have linked up plants in the U.S., Canada and Mexico.

The Trump administration has targeted NAFTA since it took office in January, but has had to wait on the official notifications it is required to give Congress as well as Mexico and Canada. Trump has insisted that a new pact must be fairer to U.S. workers and companies.

(No change to NAFTA rule of origin Mexico officials say. Click Here for the story.)

The notification period will be ends in August meanwhile the Trump administration renewed its general critique of the current state of international trade during the recent G20 summit in Hamburg, Germany. 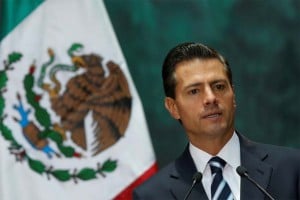 Trump also met with Mexico’s President Enrique Peña Nieto during the summit meeting, which adopted a communique supporting free trade despite the criticism from Trump. Leaders of other nations participating in the meeting, among them Canada and Mexico, voted to support the principles of free trade.

Meanwhile, vehicle exports from Mexico rose 12% from a year earlier, while production was up 4.9%. The numbers, in part, reflected the development of new factories in Mexico by companies such as Nissan, Audi, Mercedes-Benz and Kia.

(Click Here for the details about the opening of NAFTA renegotiations.)

Mexican auto factories exported 276,626 vehicles and produced 334,606 in June, according to data from AMIA.

Mexico accounts for about one-fifth of auto production in North America. Mexico’s total vehicle exports during the first six months of the year also set a record high, of 1.51 million units, up 14% from a year earlier.

Mexico’s booming auto sector has benefited from NAFTA as major manufacturers have made the country a top export hub, attracted by cheap labor and free trade pacts with more than 40 nations.