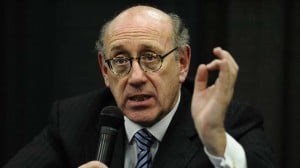 In an attempt to move lawsuits filed against Fiat Chrysler Automobiles NV for alleged excess diesel emissions closer to a settlement, a federal judge announced his plan to appoint Kenneth Feinberg settlement master.

Fiat Chrysler hasn’t been found guilty of any charges yet, but that hasn’t stemmed a swell of lawsuits against the company over the matter. The affected vehicles include 104,000 Ram 1500 EcoDiesels and Jeep Grand Cherokees from 2014-2016.

Feinberg is a well-known compensation expert, especially within the automotive industry as he oversaw General Motors compensation fund for victims and families of owners of GM cars with faulty ignition systems.

Vehicle owners and dealers have filed dozens of suits against the automaker claiming the maker’s diesel engine emissions exceed legal limits and that the company attempted to circumvent the testing and validation process with a cheating device similar to Volkswagen.

Fiat Chrysler has repeatedly denied the charges, including as recently as last month when FCA CEO Sergio Marchionne repeated the denial again. U.S. District Judge Edward Chen has given the sides until Wednesday to filed objections to his potential appointment.

The Justice Department sued FCA in May claiming 104,000 diesels sold since 2014 feature such a device. A lawyer for Fiat Chrysler, Robert Giuffra, said last month the company is optimistic regulators will approve a proposed software update as part of certifying 2017 diesel models to allow them to go on sale, according to Reuters.

The same updated software would tackle any excess diesel emission issues in vehicles from the 2014-2016 model years already on the road.

It’s not just the Justice department making noise about the problem. The U.S. Environmental Protection Agency and California Air Resources Board accused Fiat Chrysler in January of the same thing. Both agencies are reviewing FCA’s proposed fix.

In a January 2016 email, Byron Bunker, director of the EPA’s Transportation and Air Quality compliance division, wrote he was “very concerned about the unacceptably slow pace of the efforts to understand the high NOx emissions.”

Bunker’s email said the EPA had told Fiat Chrysler officials at a November 2015 meeting that at least one auxiliary emissions control device appeared to violate the agency’s regulations.

Mike Dahl, head of vehicle safety and regulatory compliance for Fiat Chrysler’s U.S. unit, wrote in response to Bunker’s email the company understood the EPA’s concerns and working to resolve the issue. He added that if the EPA declared vehicles to contain defeat devices, it would result in “potentially significant regulatory and commercial consequences,” Reuters reported.