Lots of tech -- lots of money. 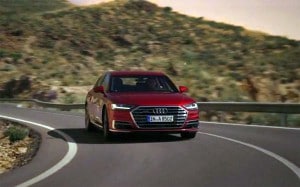 The new Audi A8 is wider, longer and has a more well-planted appearance.

Not enough sleep last night? You might be tempted to close your eyes and let the new Audi A8 take over driving duties.

After a much-ballyhooed, but ultimately limited, preview in the latest Spider-Man reboot, Audi has finally pulled the costume, er, covers off its 2018 remake of the flagship sedan. And while the styling gets a relatively evolutionary makeover, the new Audi A8 attempts to leapfrog the competition when it comes to cutting edge technology.

The new sedan features an array of lasers, a roadway scanner, more than 40 different driver assistance functions – including the ability to operate completely hands-free in traffic, at speeds up to 37 mph – and 400 different functions built into its MMI, or multimedia interface. Oh, and let’s not forget the backseat foot massager.

The A8 enters a crowded and extraordinarily competitive market, and Mercedes-Benz is upping the ante this year with a midcycle refresh of its own flagship S-Class, so it’s no wonder Audi has pulled out all the stops. 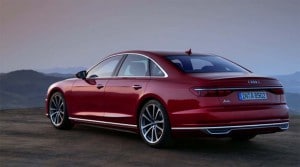 The new A8 features an array of new technologies - but is likely to carry a hefty price tag.

(Audi electrifies with e-Tron Sportback Concept. Click Here to check it out.)

Visually, the new A8 will seem immediately familiar, though it is a little larger overall. But it has a more hunkered down feeling, more intimidating and with more of a presence than the old sedan, a key goal for new Audi design director Marc Lichte, who teased what was coming with the Audi Prologue concept first shown at the November 2014 Los Angeles Auto Show.

The most immediate change comes in the form of the new Singleframe grille which is wider and more upright than on the outgoing Audi A8. The luxury arm of the Volkswagen Group has long favored simple, almost slab-sided designs. Lichte hasn’t done an about-face, but he has integrated more subtle creases and curves, including a subtle accent line that flows out of the front fender and links the front and rear door handles. A deeper crease anchors the new A8 silhouette, just above the rocker panels.

What you might not notice at first is the unusual combination headlamp system. At lower speeds the new A8 relies on its HD Matrix LED headlamps. But at speeds above 43 mph it fires up a new laser lighting system that reportedly doubles the reach of the standard lamps.

It’s interior design where Audi really has built a name for itself over the years. And, if anything, the A8 aims to take things a step further, Lichte’s team aiming to create what is described as a “luxury lounge.” There are the requisite touches of woods, perforated leathers and metal accents. There are also some intriguing tricks, like the new air vents that open and close electrically. 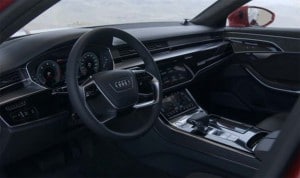 A more refined interior - and a lot fewer knobs, buttons and other hard controls.

All seats are, as you’d expect, heated and ventilated. But the throne, if you will, is reserved for the right rear passenger in the stretch A8L version. It adds some special functions, including a massaging footrest. This appears targeted at Chinese buyers who typically prefer to have vehicles of this class chauffeur-driven.

What’s readily apparent is that the 2018 Audi A8 features far fewer knobs and other hard controls than the older model, the maker opting to engin3er most of those 400 functions into twin touchscreens built into the center stack and console. That’s on top of the HD-resolution virtual cockpit display that replaces the traditional analog instrument cluster.

The new A8’s technology extends to what is being dubbed an AI active suspension. It is not only capable of scanning the road ahead to prepare for inevitable potholes and bumps, but it can automatically adjust each wheel to smooth out the ride – or tighten it up when being driven aggressively.

The suspension, along with other functions on the new A8, relies on a mix of radar, laser and other sensors. Audi also claims to have built AI capabilities into the navigation system which can learn the routes you prefer to take, rather than just using preprogrammed data.

We’ve been hearing a lot about electrification lately, Volvo just last week announcing that all new models introduced after 2019 will be hybrid, plug-in or pure EV. Audi hasn’t gone that far but all of the new A8 models will use hybrid drivetrains, the big sedan launching with a choice of turbocharged V-6s. That including a 286-horsepower 3.0-liter diesel and a 340-horsepower 3.0-liter gas package. Expect to see a 4.0-liter V-8 follow, as well as a W12 and a plug-in hybrid. Quattro all-wheel-drive is standard, as is an eight-speed automatic. 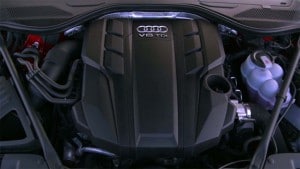 The A8 will feature hybrid power - but Audi hasn't said if the diesel version will come to the U.S.

Also uncertain is whether Audi will get the necessary go-ahead from U.S. regulators to bring over the laser headlight system. As for the diesel, Audi is cutting back on that technology in the wake of the diesel emissions scandal, but officials have said they may offer a limited line of diesel models, yet, in the American market. We’ll look to hear more from Audi by the time the A8 rolls into showrooms later this year.