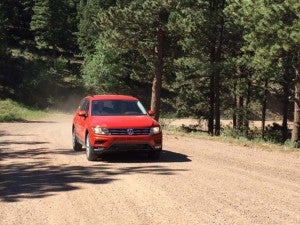 Challenging the Front Range, the 2018 Volkswagen Tiguan is longer, roomier than the original.

We’re off to a rocky start – as in the Rocky Mountains – as we head off for a day’s drive in the all-new 2018 Volkswagen Tiguan. To get a sense of what the new ute can do, VW has dropped us off in Denver and suggested a long and winding route that takes us well into the majestic Colorado countryside.

Tiguan has been the anchor of an otherwise anemic line-up of SUVs from the German maker, a problem Volkswagen hopes to address in the coming year with a complete shake-up of its utility vehicle line-up. Its original offering, the big Touareg, is set to disappear, replaced by the more mainstream, American-made Atlas.

Though smaller than Atlas, the Tiguan we’re driving will have to do the heavy lifting for the brand. It’s meant to replace a decidedly dated first-generation base model, one VW has hardly updated in more than a decade. The 2018 is more than just a refresh, however, getting an entirely new platform that allows it to grow larger – while also more lavishly equipped. In an unexpected move, however, VW has decided to keep the old model in production for the time being, targeting buyers on a budget, albeit with a new name.

Confusing? A bit, but VW is betting this three-ute strategy will allow it to target the most important of the American SUV segments. And by adding nearly 60% more cargo and second-row legroom, the Tiguan takes dead aim at the fastest-growing of those niches. 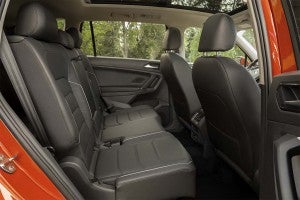 The second-row seats both slide and tilt. A third row is standard in FWD models, optional on AWD.

(Feds give VW approval to repair over 300,000 older diesel models. Click Here for the story.)

Riding the same modular MQB platform used for a vast array of Volkswagen products, the 2018 Tiguan itself grows nearly a foot compared to the old model and, at 185.1 inches in length, it’s one of the longest entries in a crowded compact segment ranging from the Honda CR-V to the Ford Escape. Shorter overhangs mean there’s even more space for passengers and cargo than you might first suspect.

It’s also one of the few that can boast seven-seat capacity – the third row coming standard on front-wheel-drive models, though it’s a $500 option on all-wheel-drive versions. True, you won’t want to spend a lot of time in that back row but it offers a level of flexibility that might otherwise require trading up to more expensive, midsize offerings – including the new Volkswagen Atlas.

Visually, the new Tiguan gets a more distinctive look than the classic model, VW moving away from a soft, slab-sided look to adopt a more crisply appearance, with sharp creases in the hood and a character line that flows from the front fender through the door handles, all the way to the taillights.

At 65.3 inches, the new Tiguan is tall, but its 72.1-inch width balances that out with a more planted feel, enhanced by the broad, three-slat grille. The headlights have a jewel-like appearance and LED lamps are offered on higher-line trim levels. The base model gets 17-inch wheels, and that goes to 20-inch alloys on the sportier Tiguan R-Line. 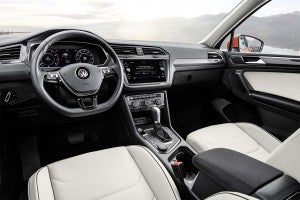 Inside, the Tiguan abandons the Spartan and generic look of the old model, even with the base S package. We spend our day switching between the SEL and top-line SEL Premium trim levels. They features a 12.3-inch display that, VW boasts, is 50% brighter than an iPhone 7 screen, a definite plus in the bright sunlight atop some of those Front Range hills. The new Tiguan’s take on the Audi virtual cockpit – here dubbed the Digital Cockpit – is quite impressive, the virtual gauges far more realistic than those on many current luxury models. There’s also an 8-inch touchscreen (the S settling for a 6.5-inch screen).

VW’s infotainment system includes the ability to display a number of smartphone apps – as well as Apple CarPlay and Android Auto. Meanwhile, the Premium models get a 480-watt, nine-speaker Fender premium audio system.

During a brief presentation, VW planners pointed out they’ve given us a real volume knob, a definite plus compared to some of the touch-only systems, such as the one found on the Honda CR-V. The instrument cluster is arranged ergonomically and the overall look and feel is lightyears ahead of the old Tiguan.

While the third row is really more kid-friendly, the second row will clearly appeal to adults. There’s loads of legroom and the seat both slides and tilts. There’s also a USB port. 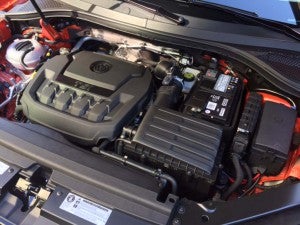 All versions of the new 2018 Tiguan are powered by a 200-hp turbocharged inline-four.

The tech package on the Tiguan has a few surprising gaps compared to the expansive offerings available on some of its Japanese competition, but blind-spot monitoring and forward collision warning with emergency braking is included on SE and Premium models, optional on base trim. There are other options, including Cross-Traffic Alert and Land Departure Warning. A rearview camera does come standard across the board.

A more noticeable gap became obvious as we headed west from the Mile High City. The 2018 VW Tiguan is, at least for now, offered with just one powertrain package: a 2.0-liter turbo-four mated to a new eight-speed automatic. It turns out 184 horsepower and 221 pound-feet of torque. That’s down 16 hp but up 14 lb-ft. Power is delivered primarily to the front-wheels but, with the AWD package, can be shifted rearward when necessary.

The engine choice seems all the more surprising considering the 2018 Tiguan runs 200 to 300 pounds heavier than the outgoing SUV, depending on whether you’ve got the FWD or AWD package. It’s not that the new Tiguan is a stone pony. It’s just not got the pep we’d expect in this class. We’ll cut VW some slack as they were willing to let us test the new Tiguan at some extreme altitudes, though the turbo should have helped make up for that. 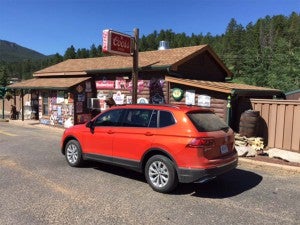 The new Tiguan adopts a more crisp and angular design language than the old model.

We’d also have been a bit more forgiving if the choice of the compact turbocharged engine delivered some segment-leading mileage numbers. But despite the fact that Auto Stop/Start is standard on all trim levels, and the fact that the engine uses a modified Miller cycle – an approach shared with many hybrids – it manages only 22 mpg City, 27 Highway, 24 Combined in FWD, 21/27/23 with AWD. That’s as much as six mpg short of what the CR-V manages.

Bigger and heavier also means that the new Tiguan isn’t quite as spry and sprightly as the smaller, first-generation ute. We felt that added mass and less aggressive suspension tuning as we ran through some mountain twisties. Add a bit more steering feel than we recalled from the older ute. The trade-off is a fairly comfortable ride that managed to smooth out even some rutted dirt roads.

Slipping into Sport Mode did add a bit more control, steering feeling less overboosted, for one thing. With the 4Motion package you get a choice of Snow, On-Road, Off-Road and Custom Off-Road modes, the latter letting you mix and match settings at your preference. 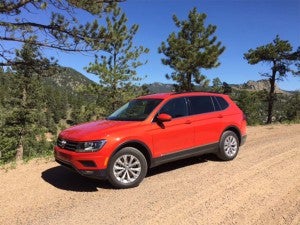 The new 2018 Volkswagen Tiguan is about a foot longer than the old version of the SUV.

While the 2018 VW Tiguan does fall a bit short in a few areas, it more than makes up for that in a number of other ways. It boasts a well-appointed interior, for one thing, and just about the roomiest package you can find in the compact segment. It really shines if you’re looking for a third row. That should get VW a place at the table with some tough competitors.

The new Tiguan is just now going on sale in U.S. showrooms.

(Another former VW executive is planning to plead guilty in emissions scandal. Click Here for the story.)