Toyota Leaves Nothing to Chance with New Camry Launch 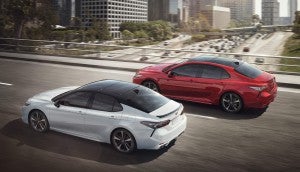 Toyota Motor Co. isn’t leaving anything to chance as it prepares for the launch of the new 2018 Toyota Camry, which will be the star of the largest advertising campaign the company has ever mounted.

“We’re almost doubling the size of the outgoing model’s marketing effort,” said Jack Hollis, who was promoted to group vice president and general manager of the Toyota Division is early March.

His ascension to the top spot came as Toyota was preparing for the launch of the eighth generation Camry, which is played a dominant role in the mid-sized passenger car segment for three decades.

In fact, it’s hard to overestimate the Camry’s importance to Toyota. It’s very much the heart of the Toyota line-up and it has been the best-selling passenger car in the United States for the past 15 years. It also has been the best-selling passenger car for 19 of the past 20 years, losing out barely to the Honda Accord for only one year in the past two decades.

(Toyota investing $1.3B in Kentucky plant. Click Here for the story.)

The Camry also has served as the benchmark for a generation of engineers and designers from the U.S., Asia and Europe, who have been asked to by their employer to insure their vehicles can match the all-round appeal the Camry has for a broad swath of American buyers.

In addition, the Camry is vital to Toyota’s manufacturing base in the United States. 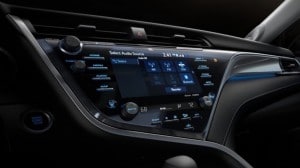 Toyota is using Automotive Grade Linux for its new Entune 3.0 system in the 2018 Camry.

Toyota Motor Manufacturing Kentucky in Georgetown, Kentucky, can build 550,000 vehicles and 600,000 engines annually and it expects to invest $1.3 billion in equipment, renovations and improvements during the next two to three years.

While the Toyota Avalon and Lexus ES are also built at the Georgetown complex, the Camry still accounts for the lion’s share of the production, which also supports supplier plants in the Midwest and Southern U.S.

(Click Here to see what goodies the new Camry is getting as standard equipment.)

The Camry is a key vehicle for Toyota globally as the automaker also sells 13,000 each month in China.

Hollis said Toyota is well aware of the fact that crossover vehicles and SUVs have dimmed the appeal midsized sedans such as the Camry. The midsized segment passenger segment has shrunk by roughly 20% in the past couple of years, Hollis said.

But with the introduction of the new Camry, Toyota hopes to get buyers to take another look at mid-sized sedan and to satisfy its traditional buyers, Hollis said.  The average age of the Camry buyers currently is 52. But Toyota is aiming the big advertising campaign at a slightly younger and wider demographic of between the ages of 25 to 49 in a bid to widen the audience for the car.

Hollis also noted that one of key reasons that the mid-sized segment has appeared stagnant in recent years is the lack of new product. However, Toyota is not the only car maker with new sedans in the product pipeline. Honda also has a new version of the Accord coming soon and Hyundai is preparing to launch a new Sonata and a new version of Nissan Altima isn’t far behind.

The new products are bound to create excitement around the segment, Hollis said. Toyota, however, is counting on the technical improvements to Camry, which sits on a new architecture, to continue its long reign as the leader of midsized segment.