Most Americans Can No Longer Afford a New Vehicle 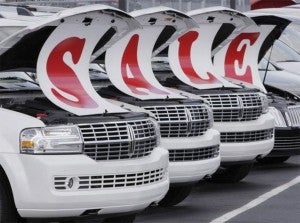 Many buyers are finding themselves priced out of the new vehicle market these days.

If you find the price of that new vehicle you’ve been looking at just a little out of reach, well, you’re not alone. When June numbers come out in a few days, the typical price for a new car, truck or crossover is expected to approach $34,000, and only in a handful of American cities is that within reach of the median household income, according to a new study by Bankrate.com.

Affordability has become an increasingly serious concern in recent years, as the price of the typical vehicle has rapidly risen to record levels. And it’s expected to become even more of an issue now that most analysts believe the U.S. automotive market is on the decline after three consecutive years of record sales.

While new vehicle prices have been on a rapid rise, government data show that household incomes haven’t kept up, making it all the more difficult for motorists to get into something new. Complicating matters, used car prices have also been on the rise in recent years, though with the overall car market softening there have been signs that the cost of used models is finally leveling off. 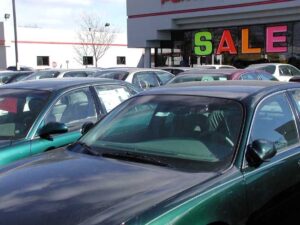 Even used car prices can stretch many budgets.

The Bankrate Car Affordability Survey looked at the country’s 25 largest metro areas and factored in not just vehicle prices but insurance and sales tax data to get a more complete picture of what it costs to actual purchase and own a new car. The study relied on the so-called 20/4/10 rule which said a buyer needs to put down 20% of a vehicle’s purchase price, sign for a loan of no more than four years, and spend no more than 10% of their annual income on car payments, interest and insurance.

“Our latest Car Affordability Study shows typical households in most of America’s larger cities don’t earn enough to afford the average new vehicle, under (that) common budgeting rule for buyers,” a statement from Bankrate noted. The financial research site advised motorists that, “You may need to stay away from those pricey cars in the showroom and focus on the less expensive models at the back of the lot.”

But even among so-called “economy cars” prices have been rising sharply in recent years. A bottom-end subcompact like the Kia Rio, for example, now carries an MSRP of $16,290. With taxes, insurance and even just a handful of options, the figure can top $20,000.

The nation’s capital, where household incomes typically top $100,000 annually, is the only city where the average new car is readily within reach, according to the Car Affordability Survey. The margin between what shoppers there can afford and what the typical new vehicle costs is nearly 12%. Read another way, D.C. shoppers can typically afford to spend about $37,223 on a new vehicle, nearly $4,000 more than what the average model is currently going for.

San Francisco is second on the list, though shoppers fall about 3% short, meaning they’ll likely have to cut into other household expenses to keep up with car payments, insurance and other costs.

At the bottom of the scale, household incomes in Metro Miami are barely half that of Washington, D.C., So, shoppers fall 59% short, meaning they can only spring for a vehicle costing $13,576 – in other words, can’t even afford that Kia Rio. Detroit is next on the list, with an income gap of more than 58%.

Many buyers are being forced to downsize their vehicle aspirations. That might mean a smaller, less lavishly equipped model than the one they’re trading in. Or they might have to break the 20/4/10 rule by stretching out their financing. Data from financial research tracking firm Experian Automotive shows a record number of buyers are opting for loans as long as eight years or more.

There’s been growing demand for Certified Pre-Owned, or CPO, vehicles – nearly new, off-lease models that have undergone extensive checks and, if necessary, repairs – though these can carry a stiff premium.

Even used cars are stretching many household budgets. Bankrate notes that used models are currently averaging about $19,200, a figure that would price the typical, previously owned model out of reach of seven of the 25 cities covered by the Car Affordability Study – even before factoring in taxes and insurance.

Industry analysts caution that if new vehicle prices continue to rise, the cost gap could price even the most affluent cities out of the market. That could become even more of a problem if the economy starts to weaken, putting more downward pressure on American wages.

(Click Here to see why GM is the latest to cut its 2017 industry sales forecast.)