“Performance on a level previously not targeted by Jaguar.” 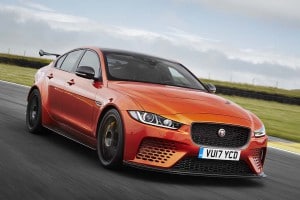 Long known for sports cars like the classic E-Type, Jaguar has been putting more muscle behind its sexy sheet metal lately, the new Jaguar XE SV Project 8 takes things to a new level.

Pouring out an impressive 592 horsepower and 516 pound-feet of torque through all four wheels, and capable of clearing 60 in just 3.3 seconds, the British maker is billing the Project 8 as its “fastest accelerating model ever.

“We have really been able to unleash the potential of our engineering and design teams in specifying Project 8,” says said, Mark Stanton, director of Jaguar Land Rover’s Special Vehicle Operations, or SVO, unit. “We are at the beginning of a very challenging and exciting development program which will see us focus on ensuring Project 8 delivers track performance on a level previously not targeted by Jaguar.”

The Project 8 version of the XE sports sedan is motivated by an upgraded version of Jaguar’s familiar supercharged 5.0-liter V-8 paired with a eight-speed automatic. To ensure this is more than a straight-line sled, power is pushed through an all-wheel-drive system that includes a torque-vectoring electronic rear differential. 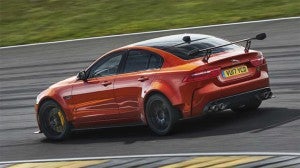 The rotary shifter found in more mundane versions of the XE has been replaced by a pistol grip shifter – and paddles – more similar to what you’ll find in the Jaguar F-Type.

The Project 8 sedan will not only rival some of its fastest competitors off the line but it joins an exclusive list of models capable of nicking a top speed of 200 miles per hour.

The upgraded XE sedan gets a number of other updates, almost all focused on improving performance. That includes a number of exterior updates. Some focus on improved aerodynamics and increased downforce, critical at these speeds. The front splitter and rear wing are both adjustable. So is the Project 8’s right height. There’s also a flat underbody panel.

(BMW introduces first M version with the all-new makeover of its X3 SUV. Click Here to check it out.) 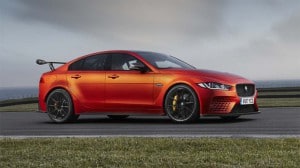 All body panels but the roof and front door have been "reprofiled" on the Project 8 sedan.

Only the front doors and roof aren’t unique to the Project 8 model, the rear doors “reprofiled,” Jaguar notes, to give the car a “more muscular body flare.” And speaking of flare, the fenders are flared out to add as much as 2.2 inches to accommodate the 20-inch wheels – shod with 265 mm rubber front and 305 mm in the rear. To put that into perspective, the back shoes match the width of the 305/35ZE20 tires found on the upcoming Dodge Hellcat Widebody.

Other performance enhancements include stiffer springs, upgraded shocks and a retuned rollbar. The Project 8 also scrubs off speed with enhanced brakes: six-piston up front and single-piston rear. 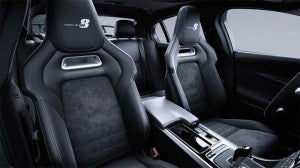 Only the four-seat package will be offered in the U.S. A Track Edition will be optional elsewhere.

Jaguar plans to produce just 300 copies of the XE SV Project 8 for global distribution, all with left-hand-drive. The new model will make its official debut at the Goodwood Festival of Speed this coming weekend.

Inside, there are plenty of upgrades, as well. The front seats are deep buckets and use lightweight magnesium frames. The back seats also offer more grip. The cabin is lavished with Alcantara fabric and carbon fiber trim.

(Jaguar set to add 2nd SUV, the E-Pace, to its line-up. Click Here for more.)

Since many buyers might want this to be something of a daily driver, creature comforts include a 380-watt Meridian sound system, in-vehicle 4G LTE WiFi, digital climate control, and standard navigation on the 10.2-inch tablet-style touchscreen. That systems adds such performance features as a g-mater, g-meter and accelerator and braking readouts. The instrument cluster is based on a 12.3-inch TFT display and includes a Track Mode interface.

U.S. buyers will be getting a four-seat version of the Project 8, but not the Track Pack(3) edition with two race-spec seats that will be offered in other markets. The British maker has not yet released pricing for the high-performance XE version.