Montana rests at the bottom of list for second straight year. 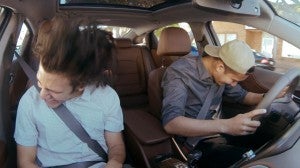 Maryland is the safest state for teen drivers, who are often easily distracted when behind the wheel.

If you’ve got a teenager behind the wheel, you know that “safest” is all relative; however, a new survey shows that the safest state for teen drivers is Maryland.

And where is the least safest? Montana, which finished ranked 51st out of 50 states – and Washington D.C. The rest of the bottom five included North Dakota, Kansas, Wyoming and Alabama.

Again, “safest” is relative as the National Highway Traffic Safety Administration is reporting an increase in the number of teen driver-related fatal accidents. Car accidents are still the biggest killers of teens in the U.S.

However, young driver fatalities are lower than a decade ago. The NHTSA said fatal crashes involving young drivers dropped 43% from 2006 to 2015. To identify the best and worst states for teen drivers, CarInsurance.com analyzed five teen-driving metrics:

The website awarded each state a weighted score to determine rankings, with the safest states topping the list and the states with the lowest scores at the bottom.

(Trump open to hiking gas tax. To find out why, Click Here.)

Maryland topped this year’s list, after finishing second last year. The state had a low number of teen-related fatal accidents in 2015 (0.3 per 100,000 residents) and has some of the strongest graduated driver’s licensing laws in the country.

Montana and North Dakota remained in the bottom two spots this year because they had a high per capita number of fatal accidents involving teens, lacked strong GDL provisions, and experienced poor teen survey results for drinking while driving and texting while driving.

Kara Macek, senior director of communications and programs at the Governors Highway Safety Association, says some of the reasons behind the increase are an improved economy, so teens have more disposable income, people traveling more, and lower gas prices. Teens using social media and messaging apps behind the wheel also play a large role.

(To see more about GM returning to its roots in Flint, Click Here.)

“Since there’s no one reason for the increase, advocates and officials need to take a multi-faceted approach to teen driver safety and look for a variety of solutions,” Macek said.