New effort to install chargers in 11 markets part of $15B settlement. 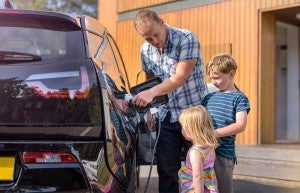 Volkswagen is getting ready to build $300 million worth of new EV chargers in 11 markets.

Volkswagen is making the first “payment” on its $15 billion settlement with the United States as it unveiled its spending $300 million on new chargers for electric vehicles through its Electrify America subsidiary.

The company is planning to build “hundreds” of charging stations with non-proprietary chargers in 11 different markets: Boston, Chicago, Denver, Houston, Miami, New York City, Philadelphia, Portland, Raleigh, Seattle and Washington, D.C. Many of those stations will be along well-traveled highway corridors.

The program is expected to grow to more than 300 stations in 15 markets. The idea behind the project is to further stimulate interest in electric vehicles by cutting down on the largest problem facing EV sellers: range anxiety.

“Electrify America aims to establish one of the largest, most technically advanced and customer-friendly charging networks in the US,” said Mark McNabb, CEO of Electrify America, in a statement.

“Our investments will make it easier and faster for millions of Americans to charge their electric vehicles while encouraging more drivers to explore and embrace electric driving.”

The company said it will begin construction in the second quarter of this year — so soon — and have the stations completed by 2019. VW ultimately committed $2 billion of the $15 billion to investments in Zero Emission Vehicle (ZEV) infrastructure and education programs in the U.S. during the next 10 years.

That breaks down to $800 million in California while the remaining $1.2 billion will be spread out across the U.S. The first “national investment cycle” calls for a network of 2,500 chargers at 450 stations.

Approximately 240 charging station sites will be installed or under development outside of California by the end of the first cycle. These sites will be located along high-traffic corridors between metropolitan areas, including multiple cross country routes, and will include between four and 10 150 kW and 320 kW individual DC fast chargers at each location, according to the company.

Ultimately, there will be charging sites in 39 U.S. states, built along high-traffic corridors with a high correlation with the EV Charging Corridors recently designated by the Federal government. These stations will be an average of 66 miles apart, with no more than 120 miles between stations, meaning many shorter-range ZEVs available today will be able to use this network.

Californians need not worry about being left out. Electrify America said it submitted its first California ZEV Investment Plan to the California Air Resources Board. The plan presents the first of four required 30-month, $200 million investments in California to support increased use of ZEV technology.

That plan includes $120 million for ZEV charging infrastructure, ZEV education ($20 million), access initiatives (i.e. ride-and-drive events) and administrative costs ($16 million), and its “Green City” initiative to showcase the benefits of ZEV usage ($44 million) upon approval of the Investment Plan by the California Air Resources Board.