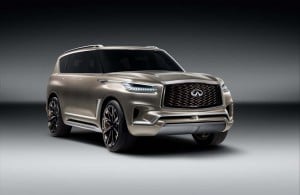 Infiniti is making some big news coming in the Big Apple with the debut of its largest and most luxurious SUV ever, the QX80 Monograph.

Officially just a “concept,” company insiders don’t hide the fact that it’s likely to translate into a production model in the not-too-distant future. The Monograph is meant to give the big ute a bit more modern presence while also moving the QX80 more up-market.

“The QX80 represents a detailed study into our expertise of exterior design,” said Roland Krueger, the president of the Infiniti brand. It “shows our concept of luxury and style on the road, and is an exploration of how we could enhance our Infiniti offering in the luxury SUV segment.”

Designed at Infiniti’s styling studio in Atsugi, Japan, the Monograph breaks away from the almost industrial look of the current QX80. With its copper skin, the concept is more svelte, especially considering the size of the three-row SUV. It’s over 16 feet, bumper-to-bumper, almost 6.5 feet tall and nearly as wide.

The QX80 Monograph’s nose features a mesh, double-arch grille with headlights Infiniti suggests are modeled after the human eye. They flow into thin lights that wrap into the front fenders. Meanwhile, twin cameras replace conventional rearview mirrors. While long the stuff of the show car circuit, several automakers – notably including Tesla – have petitioned federal regulators to allow the use of that more aerodynamic technology in the near future. 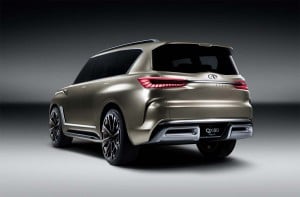 While the overall look of the Monograph is more sleek than the current QX80, it retains a macho quality, with functional front air vents an aluminum “chin” and a foreboding hood.

The taillights are intended to underscore, rather than hide, the width of the big ute, as are the wide twin exhausts – which are separated by a gloss-black airfoil meant to smooth air flow off the rear of the QX80 concept.

Further enhancing the aero nature of the new design at pop-out door handles.

As the concept’s doors open, a viewer is greeted by brush aluminum sill steps, while front and rear aluminum vents add to that machined appearance.

Intended to be an exterior design “exploration,” according to Francois Bancon, Infiniti’s brand strategy chief, there is good reason to believe the next-generation QX80 will bring many of the Monograph’s details into production.

Indeed, “Earlier Infiniti show cars have started conversations with our customers, which gives us the chance to talk about the brand’s future direction,” said Alfonso Albaisa, Infiniti design chief who will soon be promoted to global creative director for parent Nissan Motors. The QX80, he concludes, “could be used to develop our luxury SUVs in the future.”

In fact, a quick perusal of recent Infiniti products reveals that, with rare exception, its concepts have been translated quite accurately into both passenger car and SUV production vehicles. The next QX50, for example, will borrow heavily from the QX Sport Inspiration Concept of a few years back.

So, keep a close eye on the QX80 Monograph if you want to see where Infiniti is likely to head in the near future.