Civic gets sportier, but sportiest model yet to come. 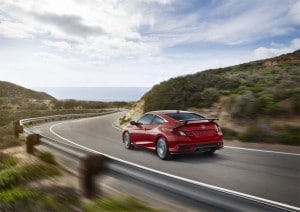 Honda decided to skip the usual auto show route with the unveiling of its 10th-generation Civic Si. As TheDetroitBureau.com earlier reported, it chose to pitch the new model to tech-savvy Millennials directly with a live YouTube debut.

A number of details had already been leaking out, so much of what was revealed was already old news – including the fact that despite switching to a first-ever turbocharged engine, the 2017 Civic Si will retain its current 205 horsepower rating. But there were still a few pleasant surprises revealed during the video preview.

“The 2017 Honda Civic Si is our first turbocharged Si and sets a new sporty compact benchmark in terms of agility and precise handling while building toward the launch of the Type R as the final chapter in our epic 10th-generation Civic story,” said Jeff Conrad, senior vice president automobile division, American Honda.

The 2017 Civic Si is, for now, going to be the highest-performance version of the compact model line Honda has to offer, though we did get a look at the top performer at the Geneva Motor Show last month, where the Civic Type R was formally unveiled.

(Click Here for a closer look at the new Civic Type R.) 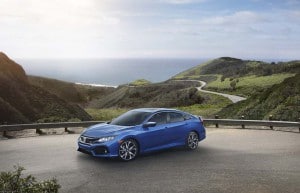 The Civic Si will be offered in both coupe and sedan trims, both with a 1.5-l I-4 and manual gearbox.

The 2017 Si will be powered by a new turbocharged, 1.5-liter direct-injected four paired with a short-throw, six-speed manual. Honda claims it provides “a thrilling new driving experience.” You couldn’t tell by the horsepower numbers which, at 205, matches the old Si’s, naturally aspirated four-banger. The key is the extra 18 pound-feet of torque – now 192 – that hits peak sooner and holds longer up the rev range.

Performance should also be enhanced by the fact that, according to Honda, the new Si is “significantly lighter” than the old model – though final specs have not yet been released.

Still, for those waiting for the ultimate in Civic performance, they’ll have to hang tight until the Type R arrives in the States. That screamer will come in at a full 306 horsepower when it screeches into U.S. showrooms near the end of spring.

The Type R will be based around the Civic five-door hatchback. The Si gives buyers the option of both both sedan and coupe body styles.

There are other reasons for performance-minded buyers to nonetheless like the 2017 Honda Civic Si. Start with the new mechanical limited-slip differential. Add stiff springs and rollbars than the standard-issue Civic sedan and coupe models, as well as adaptive shocks. 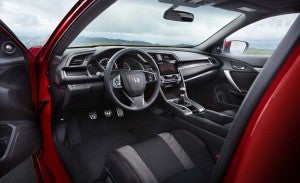 Inside the new Honda Civic Si.

Those shocks can be adjusted to a sportier setting – along with steering and throttle – with the touch of a button.

Visually, one of the most immediate cues is the rear wing. The Si twins also get unique bumpers and a black grille, as well as distinctive geometric center exhaust pipes. The wings are distinct to each model, mounted on a pedestal with the coupe, and on the deck lid with the sedans. The four-door also gets larger rear vents.

There are some welcome upgrades to the technology, as well, including the dual-zone climate system, rain-sensing wipers and a 10-speaker, 450-watt audio system. Some buyers may be less thrilled by the familiar, touch-based Honda infotainment system, here run through a seven-inch display.