Acura Gives it Another Try with “Aggressive” TLX Refresh

Taking another swing for the bleachers. 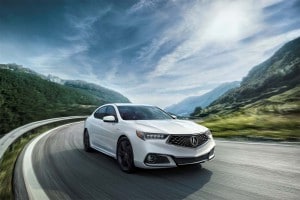 Acura is looking to spark some life into its sedan sales with a new "aggressive" midcycle refresh of its TLX.

Acura has hit a number of balls out of the park in recent years with SUVs like the MDX and RDX. However, where it continues to strike out is with its passenger car models.

The luxury arm of Honda is hoping to improve its batting average with the refreshed 2018 Acura TLX making its debut at this week’s New York International Auto Show. Designed to pick up on the more “aggressive and sporty” cues of the recent Acura Precision Concept, and with plenty of new technology, the Japanese maker is looking to join the luxury big leagues.

Acura’s midsize sedan made its debut in 2014, replacing the older TL and TSX models. Like the original TLX, the new sedan will roll off the assembly line in Marysville, Ohio.

(Acura looks at change from inside out with Precision Cockpit Concept. For the story, Click Here.)

While not quite as edgy as the Acura Precision Concept that debuted at the 2016 North American International Auto Show in Detroit, the 2018 Acura TLX definitely largely abandons the plain-vanilla look of the older sedan that seemed too easily lost in the crowd. 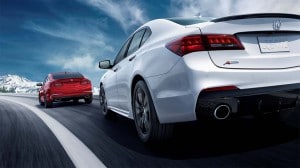 The updated TLX gets a sportier look as Acura looks to jolt it out of its sales sluggishness.

While it retains the familiar Acura diamond pentagon grille, any hint of the old chrome shield has vanished entirely. The basic dimensions of the car don’t change much – it is, after all, a mid-cycle refresh – nonetheless, the updated TLX does pick up a nicer, sportier stance and the proportions seem more in balance.

Some of the more obvious revisions include new, “Jewel Eye” headlights, a new bumper and a more sculpted hood and front fenders. In the rear, the ’18 TLX gets a revised fascia that barely concels rectangular dual-exhaust finishers and a rear diffuser. Standard issue are 18-inch alloy wheels.

There are several packages that add details such as chrome sill garnish and new seats, as well as a variety of tech features, such as trapezoidal LED headlamps.

(Click Here for details about John Mendel stepping down from Honda.)

There are different variant models including, for the first time, the TLX V6 A-Spec, which adds even more sporty details, such as an exclusive front fascia, round LED fog lights, aggressive side sills, rear diffuser accented by large, round dual-exhaust finishers and gloss black decklid spoiler, The A-Spec suspension also is sport-tuned.

The 2018 Acura TLX gets the first updated take on the brand’s distinctive dual-touchscreen display technology. It features Apple CarPlay, Android Auto and the new SiriusXM 2.0.

(Honda chief warns industry about falling back into bad habits. Click Here for the story.)

Two engine options are offered, meanwhile, including the base 2.4-liter inline four, as well as a sportier V-6. On the A-Spec, a buyer also can order either front-wheel-drive or Acura’s Super Handling-All-Wheel-Drive, or SH-AWD, system.