Hyundai Looks to Save Sonata With Midcycle Update

More than a refresh, redesign aimed at bucking up flagging sales. 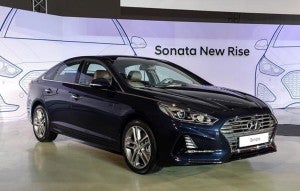 In order to give sales of the Sonata a boost, Hyundai gave it a midcycle redesign, which it debuted in South Korea.

When Hyundai Motor Co. introduced the Sonata in 2009, it hoped the new sedan would give it a substantive stake in the midsize car market. And it did … for a while.

However, sales of midsize sedans have been sliding during the last two years, and the Sonata’s totals even moreso. Sales of the Sonata fell 1.7% last year and have dropped 31% in the first two months of 2017 in the U.S.

So to stem the tide, Hyundai rolled out a midcycle styling update hoping to light a fire under consumers, especially as competitors, particularly the Toyota Camry, are unveiling new-look models.

The Sonata was redesigned with a curvier look in 2014 and not only were critical reviews tepid, but also clearly that feeling spread to potential buyers.

Hyundai’s new iteration of the Sonata features a sportier look with a curvy hood and a bigger grille. Hyundai’s next-generation Sonata will take design cues from this redesigned version, according to executives.

Hyundai is working on next-generation cars with “a different flair” for marketing from 2019, Luc Donckerwolke, senior vice president for design, previously told Reuters.

However, the future is now when it comes to auto sales, and Hyundai spent big cash to give the Sonata its extensive exterior makeover, rather than a simple update, which is often what automakers do in a similar position — reshaping sheet metal is very expensive.

However, as the competition in the segment has ratcheted up, so has the number of these near-ground up refreshes. General Motors felt it could not sit idle as the world changed around the Chevrolet Malibu and it ordered the remake that is selling so well now.

(Hyundai next maker to roll out U.S. investment plans. Click Here for the story.)

The aforementioned Camry is the beneficiary of the move and its even happening in other segments. Honda recently just gave the new compact Civic a redo. Typically, redesigns come every three or four years, but clearly, the future really is now.