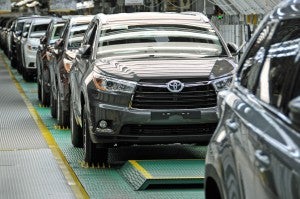 The continued rise in popularity of the Toyota Highlander in the U.S. pushed Toyota to invest in the Indiana plant that makes it.

The decision tracks the steady growth of SUV sales in the U.S. during the past couple of years, which has left carmakers scrambling to add truck and utility capacity. The expansion also comes, conveniently, at a time when at President Donald Trump is asking manufacturers to build more vehicle in the U.S.

Toyota said the jobs were part of a $600 million overhaul of its plant in Princeton, Indiana, and were included in its plans announced earlier this month to invest $10 billion in its U.S. operations during the next five years.

The automaker said the Indiana investment would increase production of its Highlander SUV, one of its most popular vehicles, by 40,000 vehicles annually starting in the second half of 2019, or around 17% from 2016 levels. The new jobs would add to the plant’s existing production line, which operates two shifts.

(Trump jabs Toyota over Mexico. Click Here for the story.)

Of the 10 U.S. Toyota plants, five assemble vehicles, and the Indiana plant is the second-largest of the assembly sites. It currently employs 5,100 people and last year produced about 402,000 vehicles.

Trump has talked – or tweeted – frequently about the automobile industry in recent weeks, criticizing automakers including Toyota for producing cars in neighboring Mexico for export to the United States.

Earlier this week, he had breakfast with top executives form General Motors, Ford and Fiat Chrysler to prod them to build more vehicles in the U.S. Toyota officials were not invited to the gathering.

Trump has also warned via tweet that Toyota could be subject to a “big border tax” if it went ahead with plans to build the Mexico plant, which the automaker announced in 2015.

Toyota last year produced around 1.4 million vehicles in the United States, its largest market. It operates 10 factories in the country, including the plant in Indiana. The company also operates a pickup truck assembly plant in Mexico, and is constructing a second site in the country, where it plans to build the Corolla sedan.